While both we - and most other analysts - have been focusing on soaring debt and QE since the covid pandemic, DB's Jim Reid correctly points out that this has been mostly in the context Developed Markets. But how have Emerging Markets funded themselves in the pandemic? The answer, as Reid writes in his Friday "Chart of the Day" note, is "via leveraging its banking system by a combination of moral suasion, liquidity provision from central banks, steep yield curves (encouraging carry trades), regulatory policies (reserve requirement cuts and easier accounting rules), and falling loan-to-deposit ratios (higher savings/weak demand) freeing up balance sheets."

This, according to some other analysts, is called "shadow" QE.

It's also a major problem: as the DB strategist explains, "if you’re looking for future potential crises this is another sovereign-bank nexus similar to that grappled with in the Euro sovereign crisis."

In other words, a Doom Loop for emerging markets. 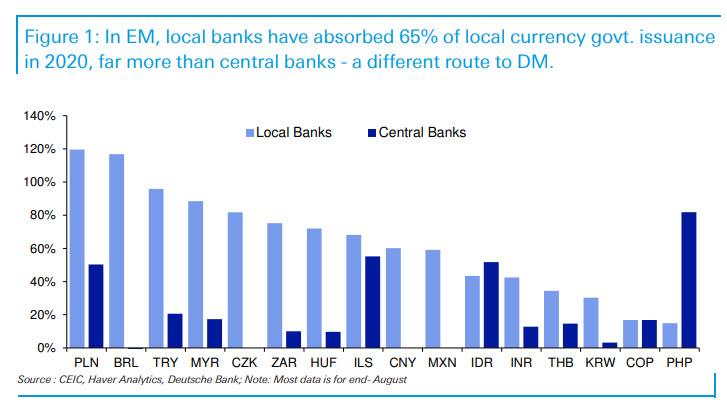 Of course, an EM doom loop is just the start, as they are many more serious problems for emerging markets, with inflation the most likely one. As Reid explains, "a return [of inflation] could force central banks to sharply raise front-end rates, or to withdraw cheap liquidity. This would change the incentives for shadow QE which is inherently price sensitive, unlike the central bank QE mostly used in DM countries."

In a separately note by DB economists  Mallika Sachdeva and Oli Harvey, the duo discuss the role that shadow QE has played across Asia, CEEMEA and Latam this year in helping governments to finance deficits and central banks to (mostly) avoid large official QE programs.

While CE3, Brazil & Mexico in Latam, and Malaysia in Asia stand out as countries where banks have played a particularly large role in absorbing issuance, a key condition of "shadow" QE has been muted inflation trends.

"If this changes, so could the calm in EM debt", Reid concludes adding that "increases in debt usually bring future crises so this is an interesting development to watch."