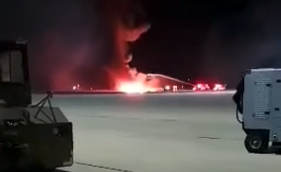 Shaw Air Force Base officials announced early Wednesday morning that the pilot had died during the accident.

Base officials say an Air Force F-16CM Fighting Falcon assigned to the 20th Fighter Wing crashed around 2330ET while on a "routine training mission." The crash is under investigation, and there was no official word on the cause.

Emergency crews on the runway at Shaw Air Force Base after a F16 crashed Tuesday night. The pilot was taken to a nearby hospital for treatment. pic.twitter.com/umSpNMRV3G

A video surfaced on Facebook shows what appears to be the crash site within the airbase, presumably on the taxiway or runway. In the distance, emergency crews can be seen deploying water cannons to contain the fiery crash that engulfed the fighter jet.

The airbase is located about 8.5 miles west-northwest of downtown Sumter. It's home to the 20th Fighter Wing, which is always combat-ready.

This isn't the first costly (in terms of money and/or lives) training accident in recent months. Back in May, a Lockheed Martin F-35 Lightning II and Lockheed Martin F-22 Raptor were lost during two separate training missions in Florida that both went awry.