Former President Donald Trump issued a statement on Tiger Woods’s crash after the golfer was hospitalized and reportedly underwent surgery.

While details about his condition are scant, Trump said via adviser Jason Miller: “Get well soon, Tiger. You are a true champion!”

“We thank you for your privacy and support,” he added.

The Los Angeles County Sheriff’s Department said they responded to a roll-over crash at 7:12 a.m. in Los Angeles. 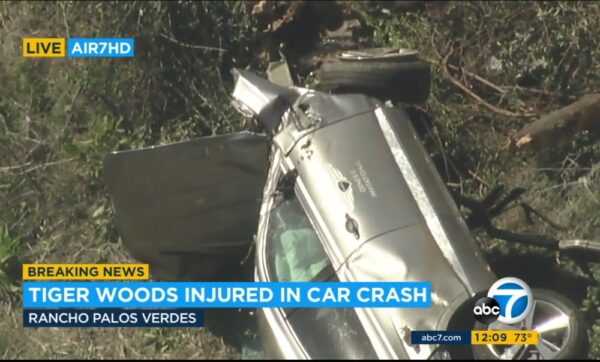 In this aerial image take from video provided by KABC-TV, a vehicle rest on its side after a rollover accident involving golfer Tiger Woods along a road in the Rancho Palos Verdes section of Los Angeles, Calif., on Feb. 23, 2021. (KABC-TV via AP)

“The driver and sole occupant was identified as PGA golfer, Eldrick ‘Tiger’ Woods. Mr. Woods was extricated from the wreck with the ‘jaws of life’ by Los Angeles County firefighters and paramedics, then transported to a local hospital by ambulance for his injuries,” the department said.

But the matter was later clarified at a news conference. “Earlier it was stated that the Jaws of Life was utilized to extricate the person trapped. It was later determined by our personnel that a Halligan tool, which is used for prying, and an axe was also used to pry the person free from the vehicle,” Los Angeles County Fire Chief Daryl Osby said at a joint news conference with Los Angeles County Sheriff Alex Villanueva.

A KABC-TV helicopter over the wreck showed a car on its side, with its front end heavily damaged just off the side of a road near a hillside. The air bags appeared to be deployed.

There was a second crash when a vehicle that had apparently stopped to help Woods got hit, said Christopher Thomas, a spokesman for the Los Angeles County Fire Department. That wreck was very minor, and no one was hurt.

Woods was in Los Angeles over the weekend as the tournament host of the Genesis Invitational at Riviera, where he presented the trophy. He was to spend Monday and Tuesday filming with Discovery-owned GOLFTV, with whom he has an endorsement contract. A tweet Monday showed him in a cart smiling with comedian David Spade.

Update: This article was updated with the latest details.