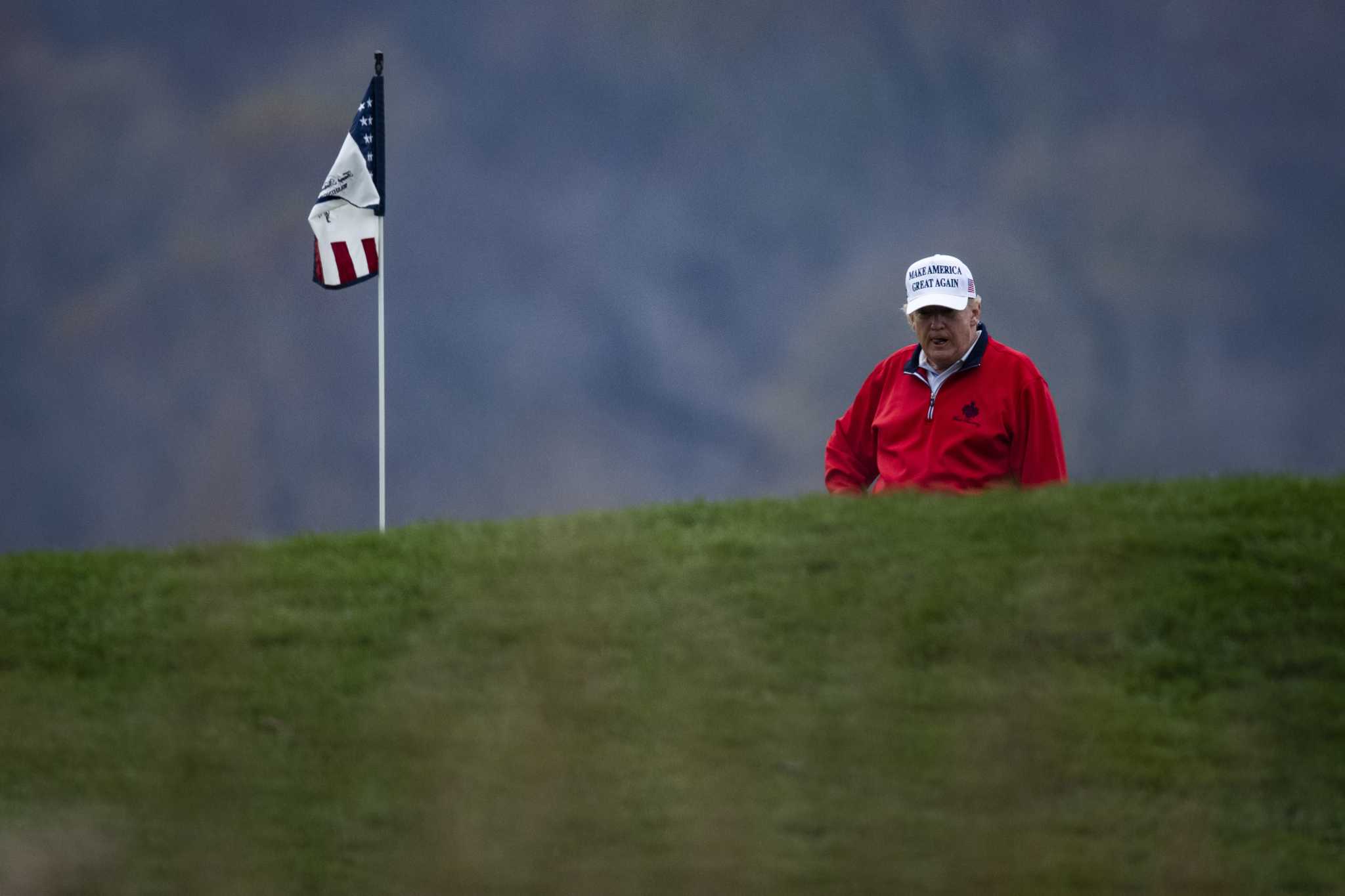 WASHINGTON - The president who likes to put on a show is mostly offstage these days.

Since President Donald Trump was declared the election's loser this month, gone are blustery speeches and stemwinder White House news conferences about the coronavirus, which never disappeared like he promised - or any other topic for that matter. Gone are lengthy call-in sessions with favored Fox anchors that often stretched so long that the hosts had to push to conclude the calls.

Gone, too, are regular White House jousting matches with the press, impromptu Oval Office appearances with random guests or any pretense of being interested in many of the duties of the job.

In the 19 days since the election, 12 have included no events on the president's schedule. He has appeared at public events four times and has played golf at his Virginia course six times. He has taken no questions from reporters.

Since Election Day, he has spoken 8,143 words publicly over 18 days through Saturday, according to Factba.se, a website that tracks all of his utterances and movements. On average in 2020, he spoke 8,398 words daily, according to Bill Frischling, the website's owner, but only 454 words per day since Nov. 3. On the last day of the campaign alone, he uttered more than 55,000 words.

"Definitively, it is the quietest period of the presidency," Frischling said. "It's the longest stretch between events, and it's the least number. Everything is off from the average universe. He spoke more in 2020 than previous years, and he's way down [since the election] if you compare him to previous years or 2020."

Trump has not left the Washington area since his loss, eschewing his annual trip to Mar-a-Lago for Thanksgiving, where an ostentatious dinner underneath the chandeliers of his gilded Florida club was usually part family gathering, part publicity event.

The president's lust for ratings - he has sometimes defended events such as his coronavirus news conferences by citing how many people watched them - seems to have evaporated.

Trump - known for cannonballing on the global stage with moves such as threatening to pull out of NATO - participated minimally in the virtual Group of 20 summit this weekend, speaking to other world leaders for a few minutes, looking downward at his phone during the proceedings and leaving early both days, aides and diplomats said. He skipped the special session about handling the coronavirus pandemic on Saturday - even as cases surge in the United States - and went to the golf course. He went golfing again on Sunday.

"My speech is available (they said I didn't make a speech)," Trump wrote on Twitter, criticizing the news media. Asked for the speech, however, the White House did not provide it. The White House said he looked forward to working with the G-20 in the future "to achieve security, prosperity, and peace for all nations."

Given a chance to brag about the successful development of a coronavirus vaccine in recent days, a historic achievement for his administration, the president attacked the company for not releasing it before the election.

"I won, by the way," he said offhandedly during a brief Friday appearance. He did not elaborate.

It is a marked sea change from the past five years, during which Trump dominated the national psyche with a constant stream of bravado: provocations, cliffhanger events, firings, rallies, tweets and controversies that often blurred one into the next. The denouement of the Trump presidency is largely playing out without Trump. He is no longer pretending to embrace parts of the job that he never liked, some advisers say.

Sarah Matthews, a White House spokeswoman, said the president is "hard at work fulfilling the promises he made to the American people and building on his unprecedented accomplishments as he works to rebuild our economy, lower drug costs, end the endless foreign wars by bringing our troops home, and deliver on his ambitious goal to have a safe and effective covid-19 vaccine before the end of the year."

Trump has deluged the Internet with a fusillade of conspiracy theories and falsehoods about the election - even as his lawyers decline to make most such allegations in court and lose case after case. He has taken brazen steps, such as meeting with Michigan's top legislators in a bid to have new electors chosen who would pick him. He has railed against judges who have ruled against him.

Trump fired two high-profile officials, including his defense secretary, by tweet. Republicans who have said Joe Biden won the election have been hit by Twitter broadsides with Trumpian clockwork. He has called Maryland Gov. Larry Hogan a "RINO," or Republican in name only, criticized Rep. Liz Cheney, R-Wyo., for hawkish views on the Middle East and attacked Sen. Pat Toomey, R-Pa., for his stance against tariffs - all after they criticized him or said Biden won.

Advisers say he is trying to figure out what to say and what to do. Unlike 2016, when Trump doubted he would win, he is genuinely surprised by the defeat, advisers say. Over the past few weeks of the campaign, advisers on Air Force One repeatedly told the president he was going to win because of the large crowds at his rallies and showed him favorable polling. Trump mused about how he would mock the pundits and his critics after the election when he won again, advisers said.

Since then, he has vacillated between delusion that he actually won, anger and deflation that he lost, and a desire to keep fighting. "I don't think he knows what he wants to say yet," said one official who has spoken to the president and who, like other aides and advisers, spoke on the condition of anonymity to reveal private conversations. "It's all over the place based on the day."

"Yes and yes," one adviser responded, when asked whether the president knows the election is over or believes it was truly rigged. Trump rails against Fox News and Georgia Gov. Brian Kemp, a Republican, and dives into Wisconsin laws on some days, while plotting his 2024 campaign on other afternoons and pondering ways to sabotage Biden. One afternoon last week, Trump told advisers that he was going to win Michigan and Pennsylvania and that he could still win Georgia. No one seemed to challenge him.

Behind the scenes, he is on a stream of phone calls, quizzing a broad range of advisers - Republican National Committee Chair Ronna McDaniel, personal attorney Rudy Giuliani, former White House chief of staff Reince Priebus, Newsmax chief executive Chris Ruddy, former counselor Kellyanne Conway, son-in-law Jared Kushner, his adult children and his campaign team - about what he should do next. But many of his advisers have also largely disappeared from the public eye. The West Wing is increasingly empty these days, four aides say, as aides look for jobs and try to avoid the spreading the novel coronavirus, which can cause the disease covid-19.

Trump, a prodigious television watcher even in happier times, is consuming many hours these days, complaining vociferously about individual Fox News hosts when they question his team's claims. He has mentioned to advisers, several of them say, that ratings will go down when he is gone.

Aides say Trump is searching for positive information, calling advisers such as John McLaughlin, his pollster, to hear how well he performed and how he really won the election. "More people than would admit to you are telling him he actually won the election and giving him a false sense of hope," a person close to him said.

Some other advisers are simply trying to cheer him up by repeatedly noting that he won more votes than any other Republican has ever won. Longtime Trump watchers say they are not entirely surprised by the relative silence.

"It's about what serves his needs, not about what moves policy forward. He doesn't have the appetite to stay in it now because he knows it's over," said Tim O'Brien, a longtime Trump biographer and frequent critic. "His only goal is to try and taint the election. So if he goes back to his base and runs again, so he can say Biden didn't really beat me, that's all he wanted out of this. He doesn't want to have to do all the dirty work himself."

On Sunday, Trump spent part of the morning retweeting supportive posts by Liz Harrington, an RNC spokeswoman, among others. "I'm not tired of winning yet," she wrote in April 2019, a post the president resurfaced Sunday.

"And neither am I!" he wrote. He then went golfing.