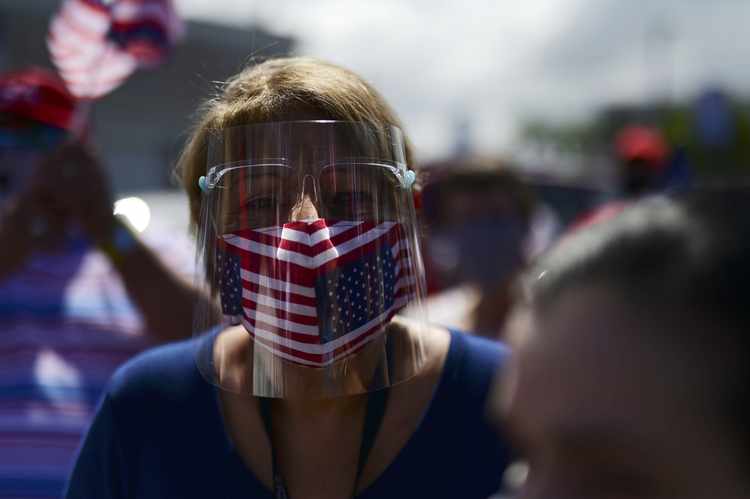 The countdown has commenced, the election is mere days away, and in this, perhaps the strangest year of our lives, anything can happen. But in campaigns across the country, strategists and pollsters and candidates are wondering just what might tip the scales for or against them in what is likely the fiercest fight of their careers. To borrow a favorite phrase from former Secretary of Defense Donald Rumsfeld, Known Unknowns are factors we are certain will impact the outcome, we just don't yet know how much.

1. COVID-19: Polls show voters disapprove of President Trump’s pandemic response and there is evidence it has also dragged down Republicans in Senate races, imperiling their majority. As the president lies about masks not working and everything getting better, the virus is surging in 35 states and the nation is on track to lose 2,900 people per day this winter. Nearly 10 months into the government's first understanding of the virus, and seven months after it asked Americans to lock down, there is still no plan to control the spread of the pathogen. This catastrophic response -- for a nation with 4% of the world’s population and 22% of COVID deaths -- means the United States is no longer a competent global leader able to protect its people or its government.

This week, high-ranking members of the military will end quarantine after exposure to the virus by one of them who likely caught it at a Gold Star event at the White House on Sept. 27, the day after the “super-spreader” celebration in the Rose Garden. This is surely something for our enemies around the world to celebrate -- a U.S. president who contracts the virus after denying it, dismissing it and belittling masks and testing. It’s why he’s losing seniors, whom he won in 2016, because they don't like being treated as expendables, cannot believe they won’t see their grandkids at Thanksgiving or Christmas, and are terrified they will spend the rest of their days in a pandemic. That vaccine promise? When it gets here, only one in five Americans definitely plans to take it because they don't have confidence in the process.

2. Health Care: This was the engine of the Democrats’ victory in the midterm elections following Republicans’ failure to repeal and replace Obamacare. Now we’re in a pandemic, COVID is likely a preexisting condition and the Trump administration has joined a lawsuit set to go to the Supreme Court three weeks from now that could dismantle the Affordable Care Act. No, Republicans are not the party of health care, as Trump is fond of saying. And no, his administration has enshrined nothing in law to protect people from discrimination by insurance companies if they have preexisting medical conditions. Yes, the case before the high court could lead to 20 million people getting knocked off the exchanges, the end of the law, and the destabilization of the entire system. The latest Kaiser Family Foundation poll out Sunday showed 79% of Americans want to keep protections for those with preexisting conditions  and 58% oppose overturning the Affordable Care Act.

3. Age: Either of the two senior citizens running for president would become the oldest ever to serve if elected. Former Vice President Joe Biden, who turns 78 soon after Election Day, has attracted the most chatter about his fitness and the assumption he will only serve one term. The other day he couldn’t remember the name of Sen. Mitt Romney, whom President Obama defeated in 2012 for president, and called him “the Mormon guy.” Meanwhile, Trump has released no credible health records during his five years as candidate or president -- including his apparent recovery from COVID-19 -- occasionally slurs his words and made a mysterious trip to Walter Reed medical center last year that appeared to be an emergency but was described otherwise. How much is this factoring into voters’ choices?

4. Women: Voters elected Trump president in 2016 knowing he had been accused of rape and had bragged on tape about sexually assaulting women. But women, who marched by the millions the day after he was inaugurated, have been powering “the Resistance” ever since. They helped return Democrats to control of the House of Representatives in 2018, making up 52% of the electorate and voting for Democrats nationally by 20 percentage points, but they have also spent these four years running for office, organizing, volunteering, and raising money. Pollsters expect a historic gender gap next month.

5. The Courts: Amy Coney Barrett is speeding to confirmation by the full Senate as the next Supreme Court justice, replacing the late Ruth Bader Ginsburg, who died last month. Democrats raised more than $300 million in one week following the news of Ginsburg’s death. Conservatives were exuberant as Barrett’s nomination was announced at the White House at what turned out to be the super-spreader event where multiple guests became infected with coronavirus. Since then it’s hard to know how much excitement her nomination has meant for Republicans on the campaign trail, how much money was raised and who watched the confirmation hearings. Surely Trump’s legacy of confirming three Supreme Court justices, as well as 200 lower court judges -- all thanks to the tenacity of Senate Majority Leader Mitch McConnell -- is hugely consequential and will be for generations. Some Republicans believe that adding a sixth conservative justice days before the election could help Biden win, and to many of them it would be worth it.

6. Message: In 2016 Trump had the message, Clinton didn’t, and it mattered. Yet now President Trump’s team and the national party have spent $1 billion and yet voters would be hard-pressed to discern his message. Assertions that Sleepy Socialist Joe won’t make it through two months of the presidency and will bring low-income housing to your neighborhood really aren’t cutting through. Biden’s message has been largely focused on the failed pandemic response, and his ads talk up health care, wages and jobs – a once-in-a-century crisis and bread-and-butter voter concerns.

7. The Economy: In many polls, President Trump retains an edge on the issue of the economy, but is still behind Biden overall, as voters are prioritizing the direction of the country over their own financial picture. It’s unprecedented to see majorities in polls say they are personally better off than they were four years ago but have the incumbent remain steadily behind the challenger. There are polls in which Trump has lost even this advantage, however. Despite his virus denial (we’re rounding the turn!), millions and millions of Americans who work in industries that cannot see a return in demand until much of the population is vaccinated and the virus is crushed are worried about their jobs and businesses. They work in bars and restaurants, for airlines, hotels, resorts, spas, gyms, bowling alleys -- you name it.  It’s also worth noting that the perception of “the economy” is different for each voter, and that the economy doesn’t always mean “my economy.” In a CBS/YouGov poll of Wisconsin voters that asked who Trump is concerned about, the responses were: wealthy and elite (60%), the middle class (35%), and the poor (5%), while Biden is viewed as concerned about the middle class (47%), wealthy and elites (35%), and the poor (18%).

8. Persuasion vs. Mobilization: It has been clear since Day One of Trump’s term that mobilization of his own voters was all that mattered to the incumbent president, who has never campaigned or governed for Americans who didn’t vote for him. Conversely, since Biden became a candidate he has reached out to the middle, seeking to bring Obama-Trump voters back in the fold, running as a moderate and prioritizing persuasion over generating the excitement of new, young and non-white voters, which is where the progressive left always wanted him to concentrate his energy. After the election we will learn how many new voters Trump registered and turned out, how many Republicans and independents Biden won over and whether progressives embraced Biden in significant numbers or disengaged.

9. Mail-In Ballots: In the pandemic election, officials across the country have made it possible for more than three in four voters to cast their ballots by mail. President Trump has attempted to delegitimize the outcome of the election in advance by trashing vote-by-mail, citing fictional fraud. Benjamin Ginsberg, one of the most prominent GOP election lawyers in the country, is so worried about what these fraudulent claims will do to the Republican Party that he wrote in a recent Washington Post op-ed, “As a Republican lawyer who has spent four decades monitoring elections and looking for fraud, I can say with confidence that evidence to support the president's words and threatened actions does not exist. ... His aim appears to be seeding chaos in order to somehow cling to power.” Ginsberg fears Trump will dismiss vote counts on or after Election Day in states where down-ballot Republicans could be holding narrow leads and where officials will be forced to agree with the president that the results are illegitimate or else defy him. Polls have consistently shown Republican voters planning to vote on Election Day while Democrats had planned to use absentee ballots. Yet despite those projections, millions of voters are showing up to the polls early -- by Sunday evening roughly 28 million people had already voted. How many states will be counting ballots days after the election? And will the results be contested? How significant will absentee voting be to the winner’s margin?

10. The Russians: Sadly, they’re doing their best to interfere again, according to top officials throughout our government, including FBI Director Chris Wray, who recently warned that Russians are actively interfering to “denigrate” Biden.  Special Counsel Robert Mueller and the bipartisan Senate Intelligence Committee have built a record of the Russians’ extensive and systematic attacks through disinformation and hacking in 2016, when they targeted election systems in all 50 states. While there is no evidence votes were changed, the Intelligence Committee report included the possibility that the Russians were assessing their capabilities “for use at a later date,” which has remained the urgent concern of officials at the National Security Agency, the FBI and the Department of Homeland Security. Bob Woodward’s book revealed that two counties in Florida, St. Lucie and Washington, sustained attacks on their voter registration systems, where malware placed by the Russians “was sophisticated and could erase voters in specific districts.” There are too many nightmare scenarios to imagine.

A.B. Stoddard is associate editor of RealClearPolitics and a columnist.