MACON, Ga. — He pitched rural voters in Iowa on Wednesday, visited North Carolina and Florida on Thursday — states his campaign once insisted were a lock — and is spending Friday evening here in Georgia, which Democrats last carried in 1992.

In the final 18 days before voters decide whether to keep President Donald Trump in the White House, the incumbent Republican is spending precious time in states that were never supposed to be this close but now threaten to upend his reelection campaign.

The president’s campaign schedule in the final weeks is either a tacit acknowledgment that he’s on the brink of crushing losses in major battlegrounds and once-impenetrable red states, or an over cautious exercise in due-diligence — an effort to shore up support in GOP strongholds to prevent an electoral blowout, or a push to squeeze more from his base in a contest that may be won in the margins.

“I don’t think there’s any way Georgia goes to Biden, but there’s no reason for Trump not to come here. He doesn’t want to have a Wisconsin moment to look back on come Nov. 4,” said Seth Weathers, the former director of Trump’s Georgia campaign, citing one of the most common critiques of Hillary Clinton’s 2016 strategy — that she declined to visit the Badger State even once after securing the Democratic presidential nomination

Beneath stadium lights outside Middle Georgia Regional Airport, Trump urged his supporters at a Friday night rally in Macon to turn out on Nov. 3 to “show the great people, the great American people, that we’re in charge.” Citing debunked claims about widespread voter fraud, Trump cautioned the crowd here against mail-in voting and encouraged them to show up at the polls instead.

With Biden ahead in both the polls and fundraising and Trump's message all over the place, things aren't looking great for the president's reelection efforts. But that doesn't mean the campaign is over yet.

Trump’s defensive posture follows a stretch of devastating blows to his reelection campaign that further imperiled his standing in the industrial Midwest, where the 2020 election is likely to be decided, and cast new doubt on his ability to keep the Sun Belt in his column.

His own battle with Covid-19 and raucous performance in the first presidential debate sent his poll numbers among women and seniors into a tailspin earlier this month, leaving him little time to reverse the sharp downward trend. The outcome is a campaign stretched increasingly thin in the last leg of the 2020 race, as Trump tries to spend enough time in Wisconsin, Michigan and Pennsylvania to move the needle with voters without neglecting other states that demand his attention.

Despite his 5-point margin of victory in Georgia four years ago, suburban women in the Atlanta suburbs could nudge the state into Biden’s column this cycle — creating a catastrophic loss for the GOP that could further jeopardize its Senate majority. A late September survey by Quinnipiac University showed Sen. David Perdue running neck-and-neck against his Democratic challenger Jon Ossoff, while Sen. Kelly Loeffler — who is locked in a special election for the state’s other Senate seat — trailed Democrat Raphael Warnock in the same poll.

Still, Trump insisted suburban women would stick by him next month, citing their concerns over “law and order” and the violent riots that unfolded in several U.S. cities earlier this summer.

“Kamala-mala-mala, I don’t know, whatever,” Perdue said of his Senate colleague.

Over the weekend, Trump will hold events in Michigan, Wisconsin and Nevada, followed by back-to-back rallies in Arizona on Monday. Arizona has become a must-win for the president, who is poised to lose one or more of the Rust Belt states he carried four years ago, according to numerous polls. Without the Copper State, Trump’s campaign aides acknowledge that he would have to pick up Minnesota, which increasingly seems out of his reach, or a combination of states he lost in 2016 — such as New Hampshire and Nevada — to reach the 270 electoral votes needed to clinch a second term.

“I’ve never seen a Republican president with numbers like this in Arizona,” said a person close to the Trump campaign, describing the latest statewide polls as foreboding.

But here in Macon, Trump suggested the massive crowds at his campaign rallies — which he resumed earlier this week after receiving clearance from White House doctors — are a reliable barometer of how he will perform on Election Day. While acknowledging that “winning the Electoral College is a very, very hard thing to do,” the president said his enthusiastic base will afford him victories in states he lost four years ago.

“All these rallies are like this. We have more enthusiasm than any candidate in the history of this country,” Trump said. “We’re going to win Minnesota. You know, Minnesota hasn't been won [by a Republican] since 1972.”

“There’s going to be a red wave next month,” he added. 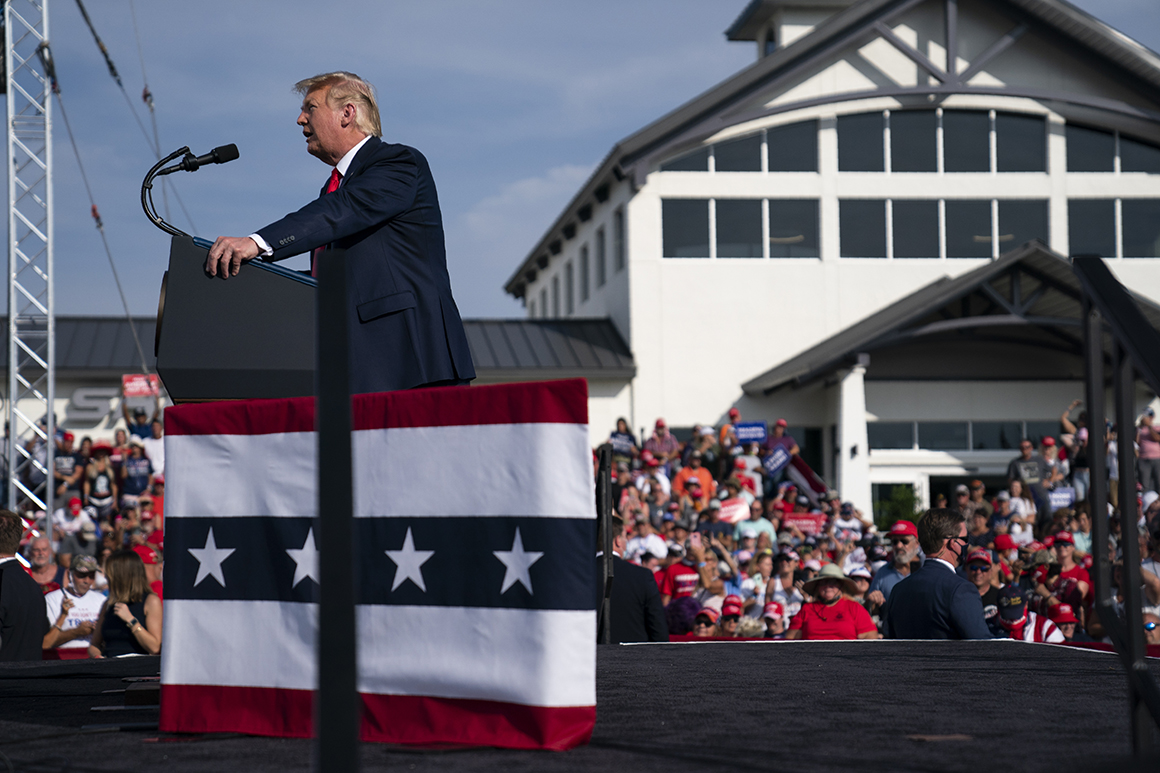 Before leaving for Georgia on Friday, Trump huddled with aides at his 800-acre golf club in Miami to discuss stalled negotiations over a Covid-19 relief package. The president pushed Senate Republicans to get behind a deal during an NBC News town hall the previous night — a push that critics say is an eleventh-hour attempt to salvage his reelection campaign.

But out on the campaign trail, Trump struck an optimistic tone. At the outdoor rally in Ocala, he promised a “big, big victory in the next 18 days” and “thunderous defeat” on election night. During an event with senior voters in Fort Myers, he claimed to be ahead of Biden in the Sunshine State.

Trump’s cross-country campaign schedule has accompanied a small but noticeable shift in messaging during events that are narrowly aimed at reaching new voters — a change he made amid pressure from aides after his initial debate performance elicited universally poor reviews. At the “Seniors for Trump” event in Fort Myers, he acknowledged the grief many have felt during the coronavirus pandemic.

“You lose someone and there’s nothing to describe what you have to bear,” he said, adding that he’s “moving heaven and earth to safeguard our seniors” from the lethal virus.

During riffs about suburban women at rallies in Florida and North Carolina, he touted his nomination of Judge Amy Coney Barrett, a mother of seven who is poised to be confirmed to the Supreme Court by the Senate later this month.

Trump is expected to remain on the campaign trail nearly every day until the election, zig-zagging between the Midwest and southern tier of the U.S. to cover all his bases. Next week he will participate in his second and final debate against Biden at Belmont University in Nashville.