Elsie Eiler is the sole resident of Monowi, Neb.

In the mornings, she walks along the empty main street to open its one remaining business, the Monowi Tavern, which her family has run since 1971. She operates it 12 hours every day of the week except Monday.

Half a dozen dusty pickup trucks emerge from the rural expanse of surrounding Boyd County as Mrs. Eiler, 88, turns on the lights and restocks the beer coolers.

The regulars pour their own coffee, set down a dollar and join the conversation. The farmers want to know who’s selling hay and who’s buying it. Everyone is concerned about a nearby wildfire made worse by powerful winds and a prolonged drought.

There’s gossip, too — who’s getting married or divorced, who has been born and who has died.

On the bulletin board near the kitchen, layers of photographs knit together past and present generations who have called the rolling prairie home.

The tavern serves as one of the last gathering places for the remaining residents of the county. But the Monowi Tavern won’t last forever. One day not long from now, Mrs. Eiler will be gone, and with no one else to take it over, Monowi is likely to be wiped from the map.

“The bar is the town, and I’m the town,” she said. “We’re all so intermeshed, you can’t quite imagine one without the other.”

Population loss has decimated other towns in Boyd County, a 550-square-mile region south of the Missouri River. About 2,000 people still live in the county, down from a peak of 8,800 in 1910. The decline is part of a trend playing out across the state.

Farm sizes have steadily grown in recent years, as larger, more efficient operations became better suited to survive the industry’s shift to a global market. Small family farms — once the backbone of the local economy — had to expand their operations or get out. Many got out. And without a way to make a living, generations of young people left for jobs in cities. Towns and businesses disappeared in their absence.

I have visited Monowi nearly a dozen times since 2005, most recently in March. I usually drove from Omaha, 200 miles to the southeast. On my way out of the city, I could see recently developed shopping malls, subdivisions and expanding urban sprawl — all signs of migration away from rural life.

Beyond the city, rows of corn and soy stretch past the horizon. Agricultural land blankets 92 percent of Nebraska. The road to Monowi is dotted with cows grazing alongside shuttered gas stations and not much else.

The area’s remaining residents must drive dozens of miles up and down the highway to fill their gas tanks, visit the bank, shop for clothes or eat at a restaurant.

At Mrs. Eiler’s bar, I heard former farmers tell about the calamities that drove them out of business. A barn fire killed one man’s two dozen hogs, then lightning struck his cattle. After enduring years of drought, another watched as torrential spring rain washed out freshly planted seeds. Many of the young people leaving the area are just in search of an easier way to make a living.

About one in three of the nation’s rural counties is experiencing sustained population loss, according to a study from the University of New Hampshire. A third fewer residents live in those counties today than in 1950. And while some states, including Nebraska, have created initiatives targeting population loss, those programs have not reached places as far gone as Monowi. The town continues to exist only because Mrs. Eiler files the required county and state paperwork every year. On top of bartending and cooking, she is the town’s mayor and tax collector.

Once a community loses key businesses like a post office or grain elevator, “there is a point of no return,” said Cheryl Burkhart-Kriesel, a professor of agricultural economics at the University of Nebraska, Lincoln.

“When a community center closes, you’re just chipping away at that social capital,” she said. “And then it becomes very hard to get anybody to move into town.”

The Monowi Tavern is a place for those who remain to come together — for birthdays, Sunday night euchre tournaments, family reunions, funeral wakes. Mrs. Eiler keeps the collective memory of the town together, when connections to neighbors and traditions are disappearing. 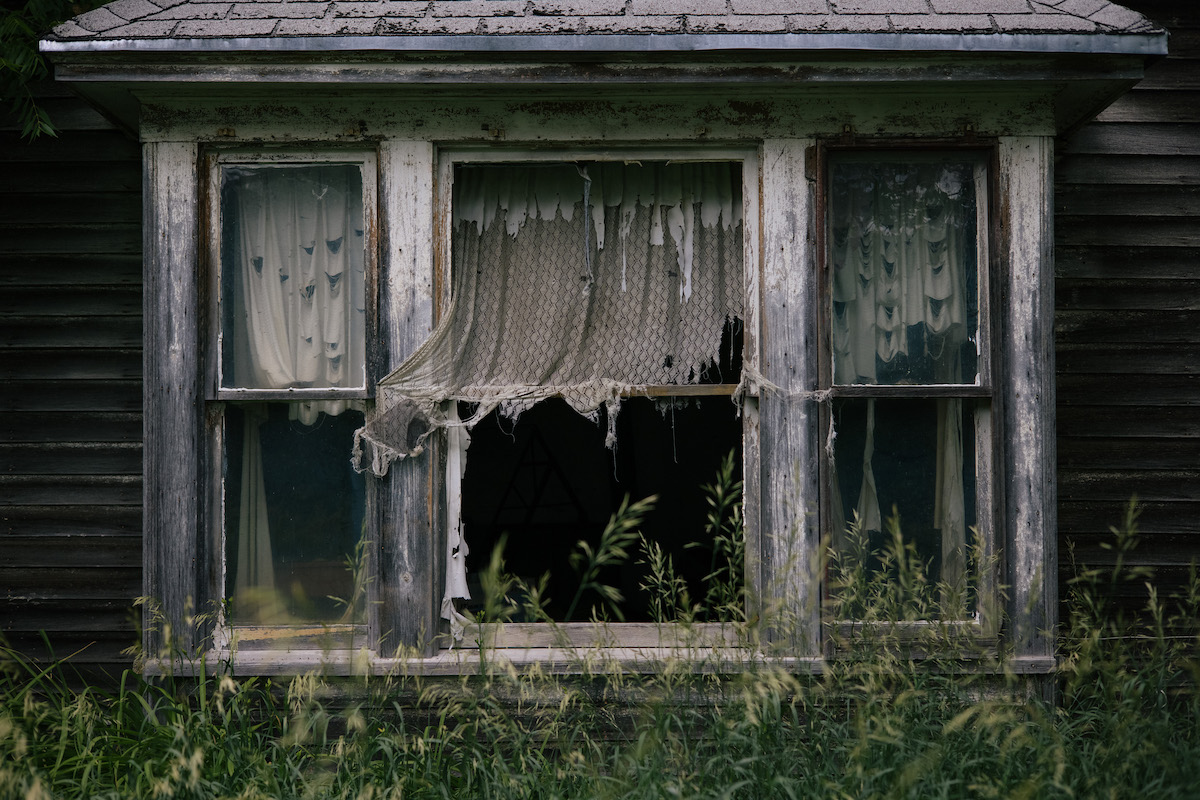 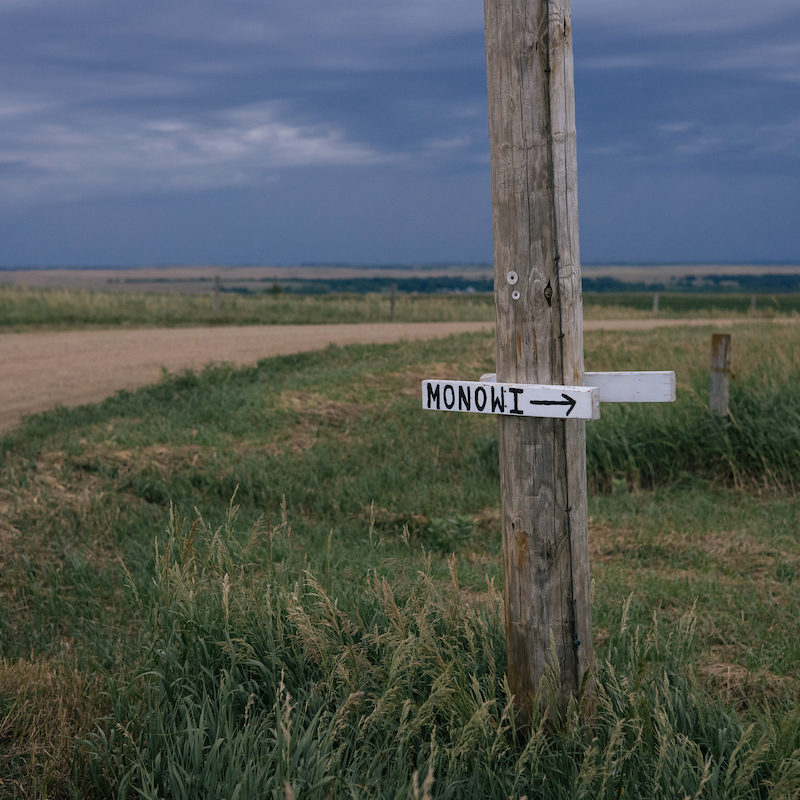 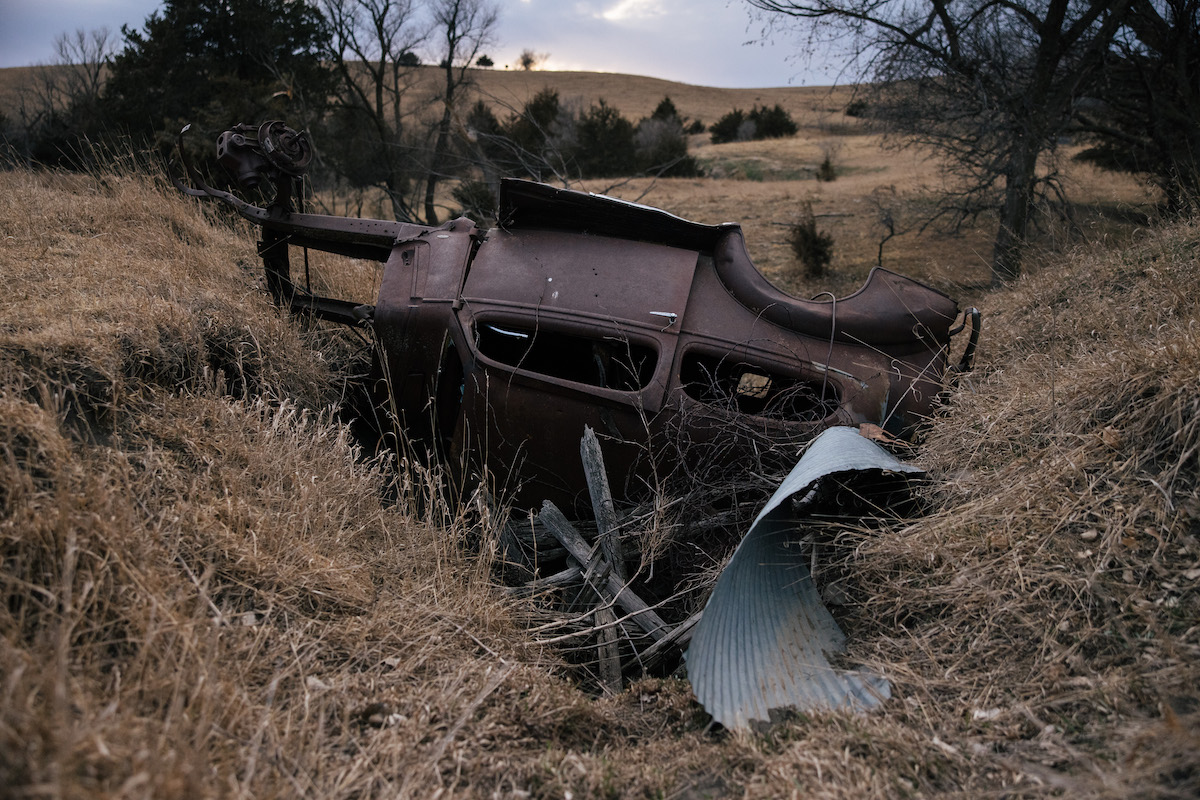 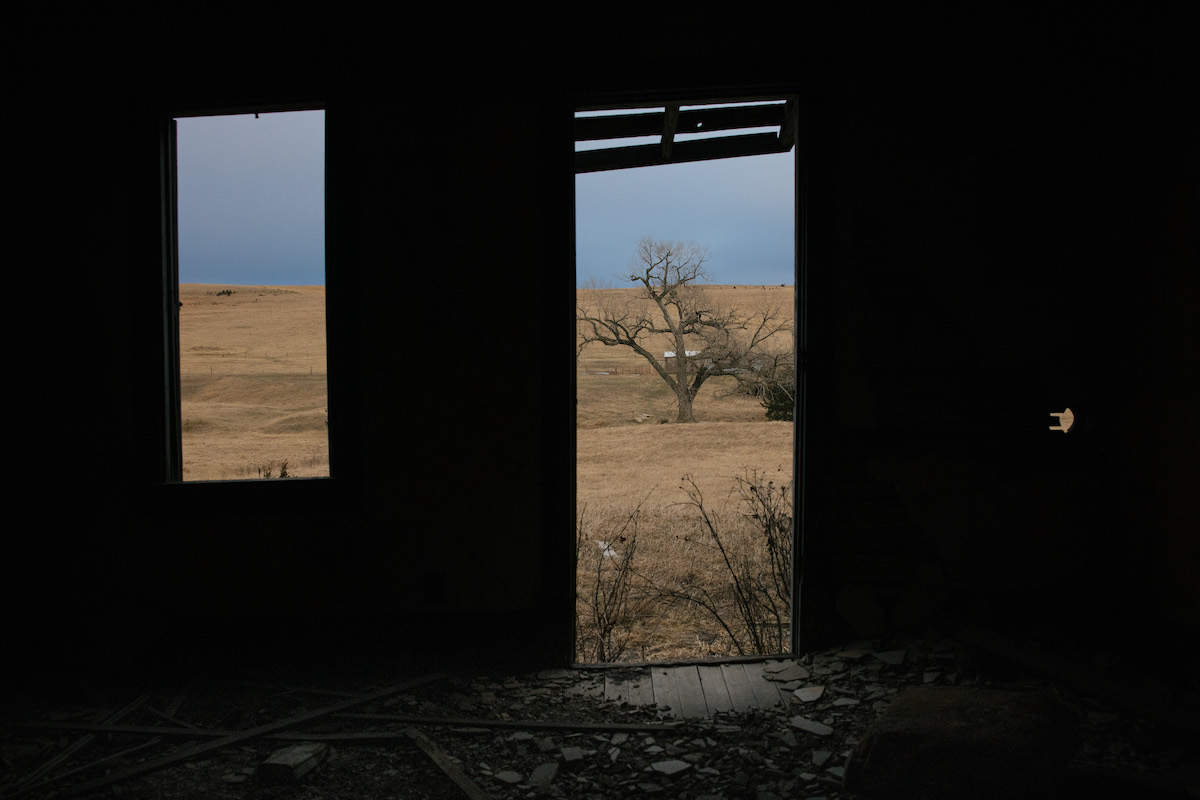 Monowi owes its existence to a 208-mile Chicago & North Western train line that connected farmland to growing cities in South Dakota and Nebraska.

Established in 1902, the town reached its peak population of around 140 in the 1930s, the decade when Mrs. Eiler was born the youngest of five Piklapp siblings. Growing up half a mile west of town in a two-story farmhouse, she raised chickens, pigs and cows and harvested corn and oats.

The countryside “was full of little 180-acre farms” like theirs, but not anymore.

In 1954, Mrs. Eiler was married to Rudy Eiler, whom she had met in Monowi’s one-room schoolhouse. They spent several years working on her father’s farm, but when the Monowi Tavern came up for sale in 1971, the Eilers bargained that the bar could provide a more reliable living.

Business was steady for a time, but by the end of the 1970s, the last train had passed through town. The local railroad workers and their families left. Not even the train tracks remain.

At the turn of the century, the Eilers were the last two residents in town.

“They all mourn with you.” 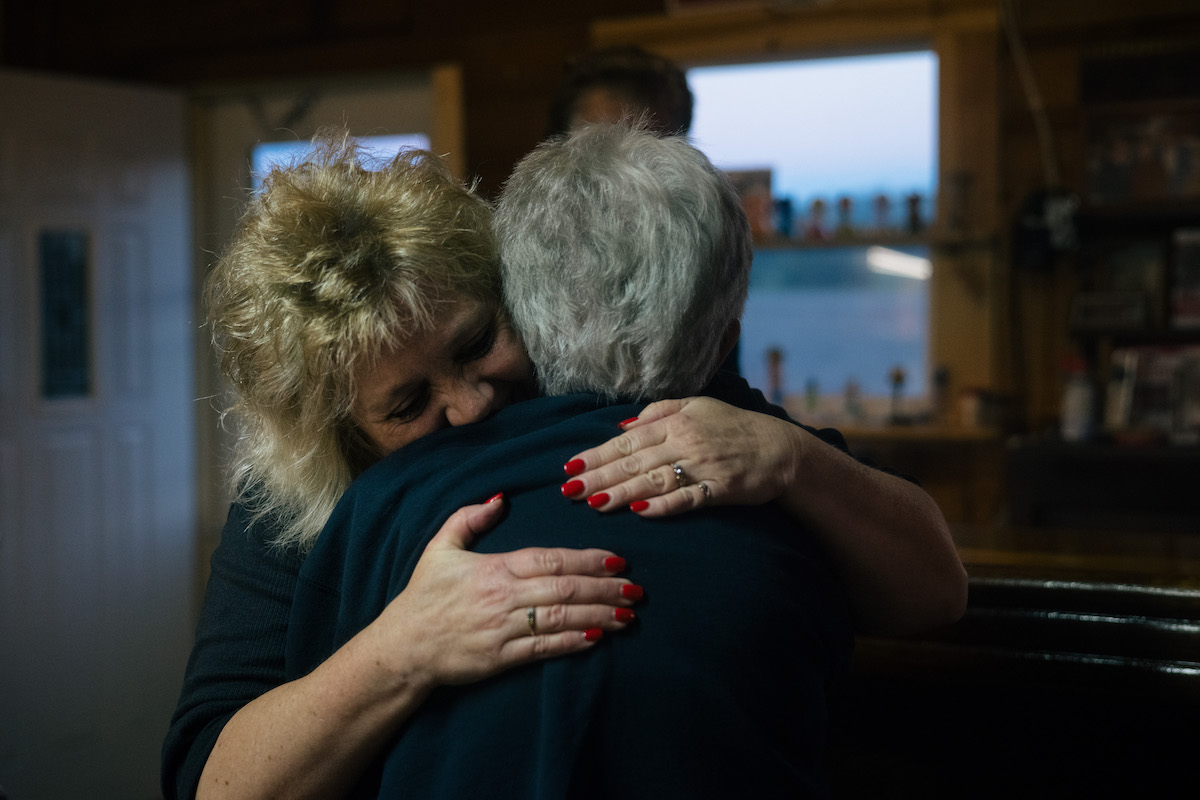 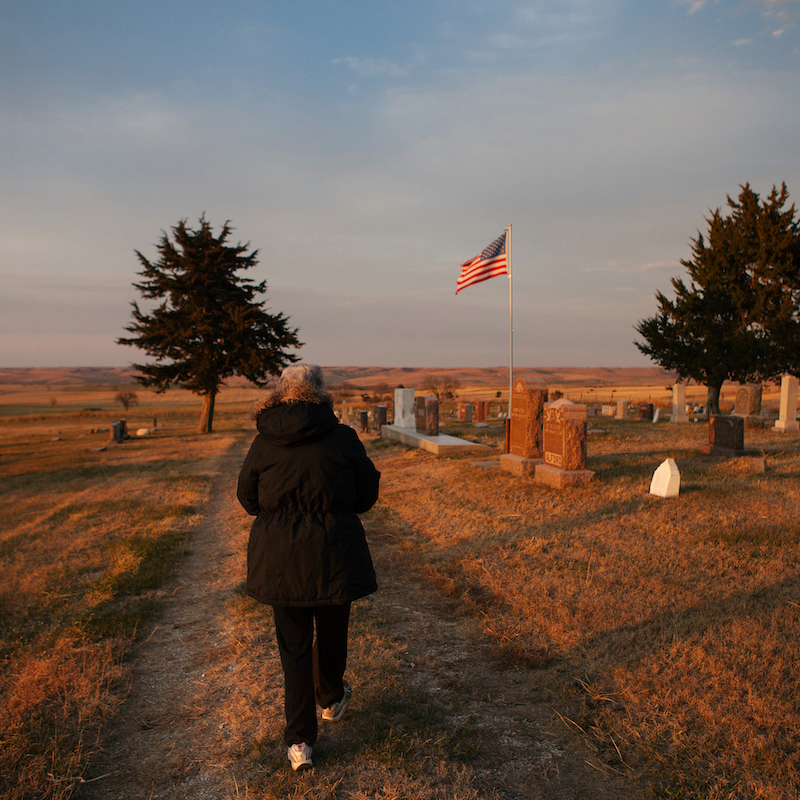 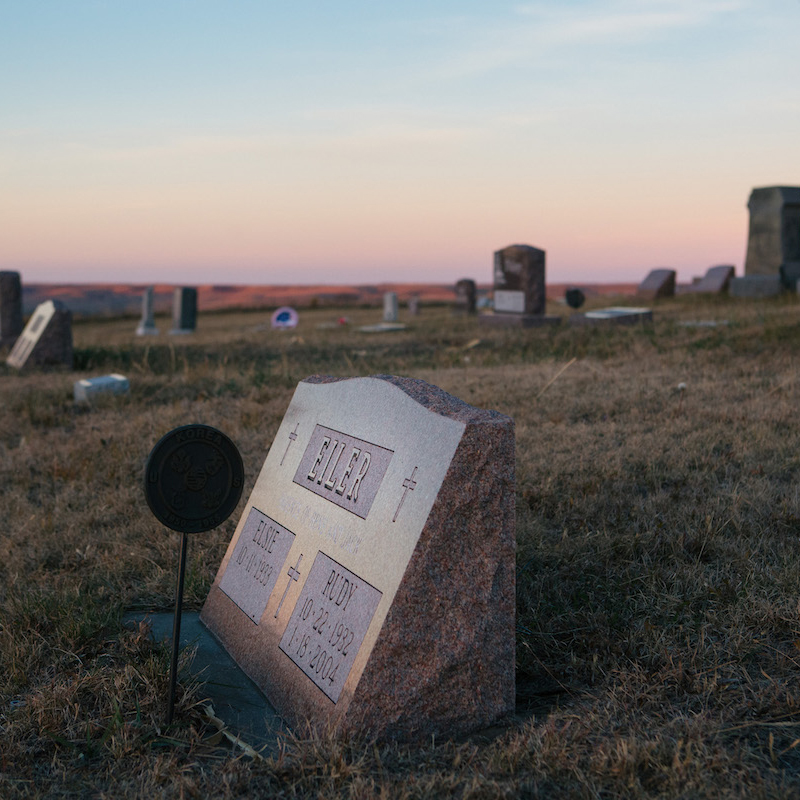 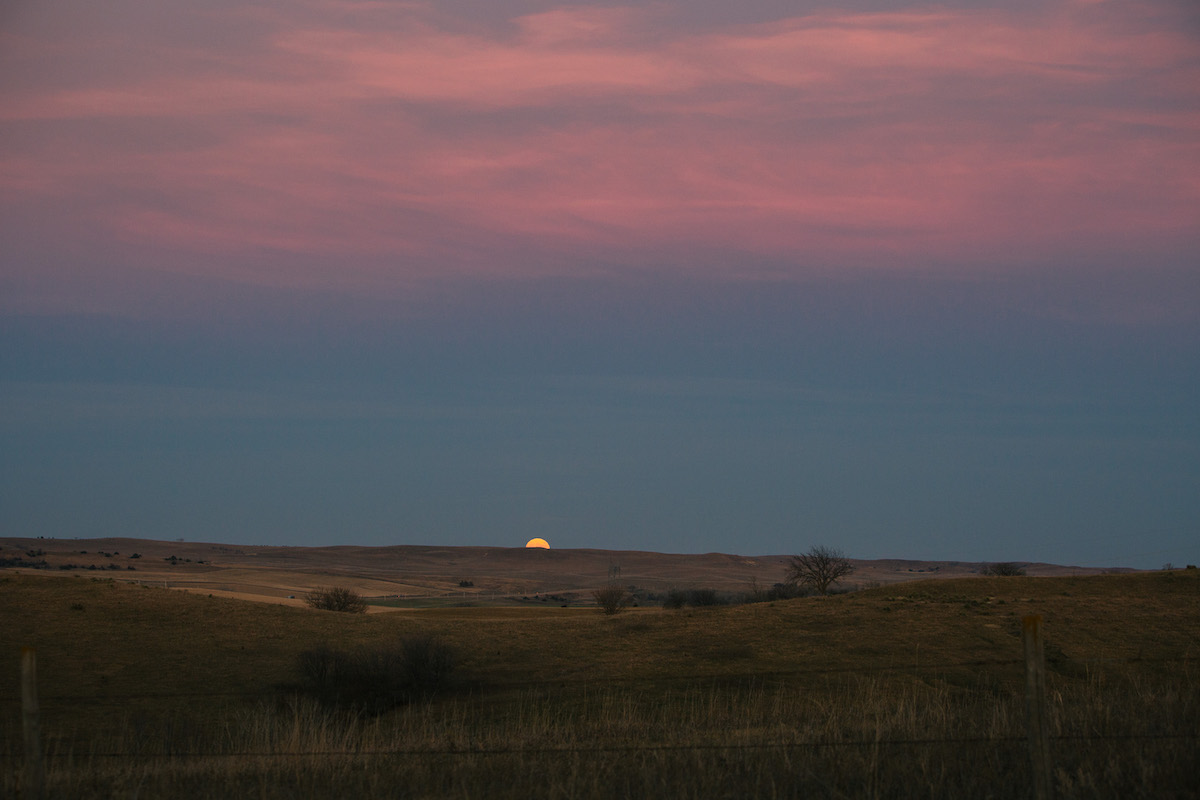 Lung cancer took her husband a few months short of their 50th wedding anniversary in 2004. She survived her own bout of colon cancer in 2011. But three years ago, her son, Jack, died of throat cancer at 62. She had hoped he would take over the bar someday.

She wears a locket with Jack’s photo. “If I’m kind of blue or lonesome, I feel like maybe he’s more with me,” she said.

Even in grief, Mrs. Eiler is never truly alone. The bar has been a throughline in times of joy and sorrow.

“When somebody needs it, or you lose somebody, the whole works is just like one big family,” she said. ”They all mourn with you.”

Grant Nielsen, a fifth-generation rancher, grew up with Mrs. Eiler. His ancestors are buried near hers in the cemetery southwest of town. He remembers visiting the bar with his grandfather during harvest in the 1980s.

“It is the community, because that’s where you go see neighbors,” Mr. Nielsen said. “Elsie is the heart of the community.”

“They don’t see that it’s real people, and it’s real connections to the people and the land and that place that keep her there.” 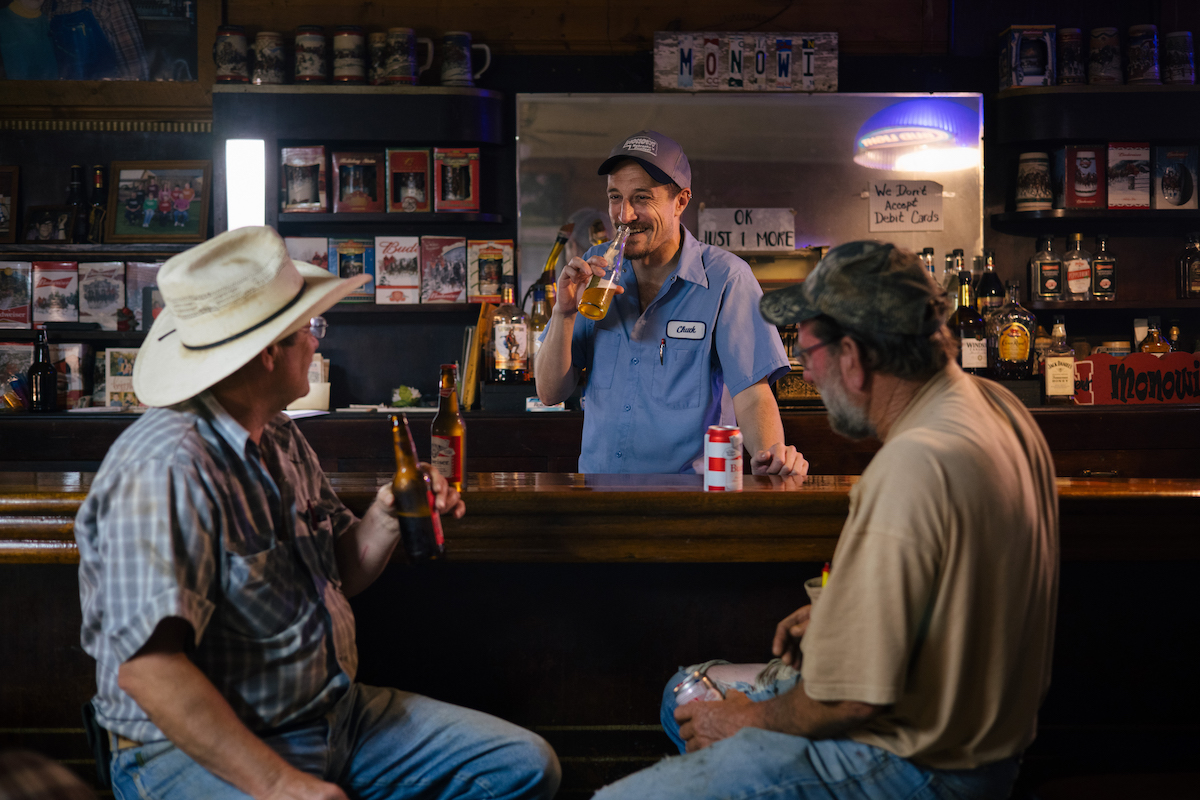 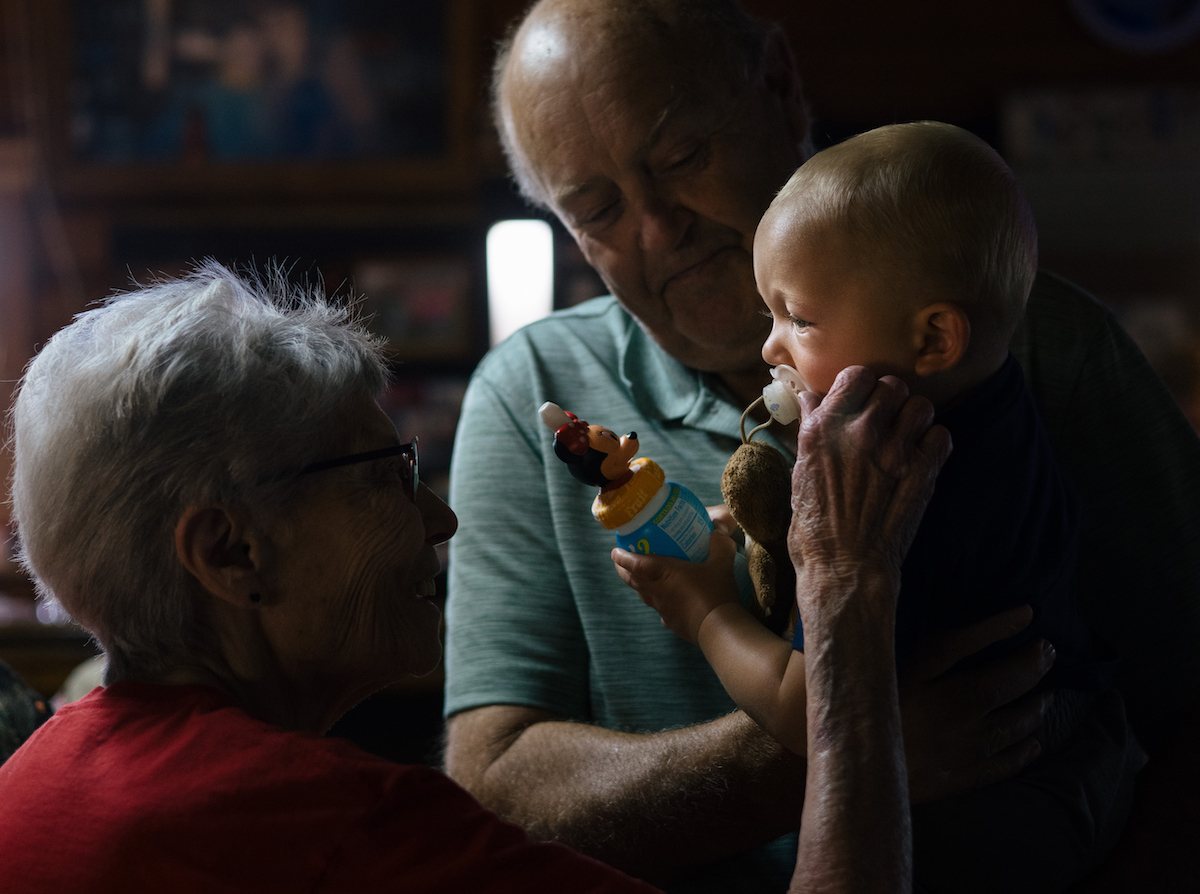 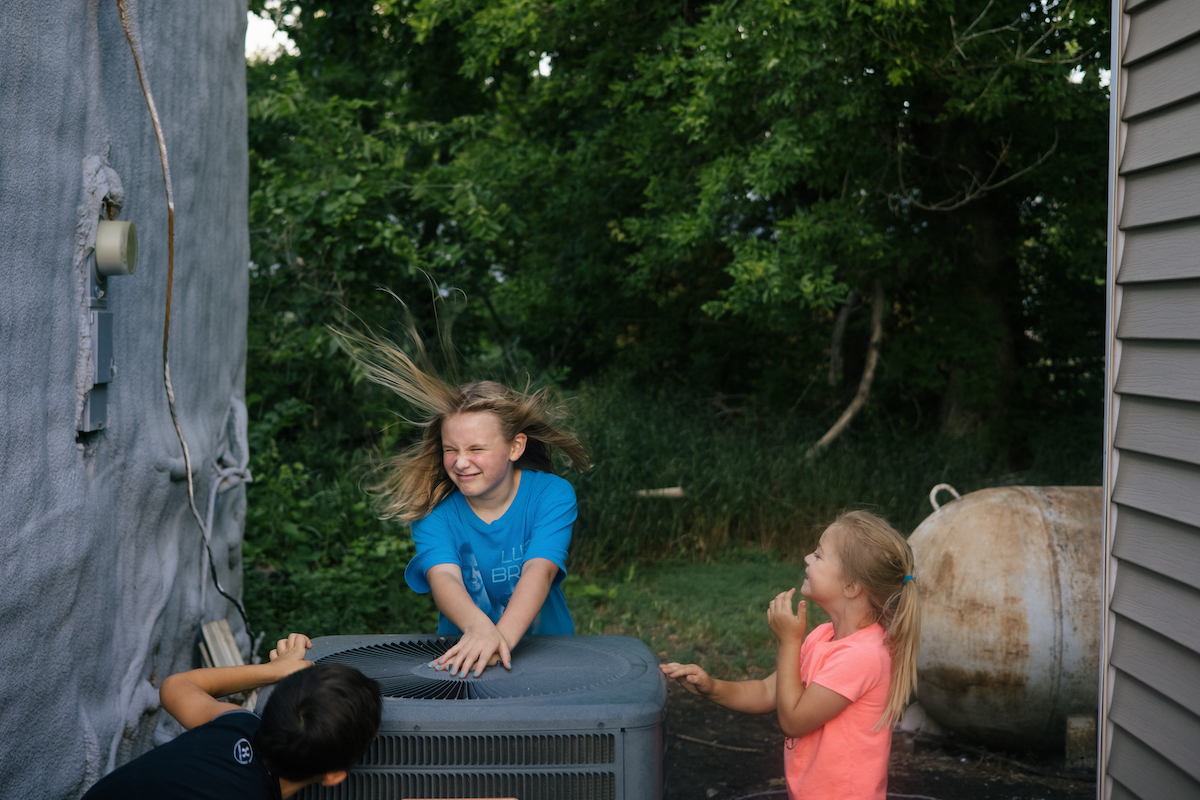 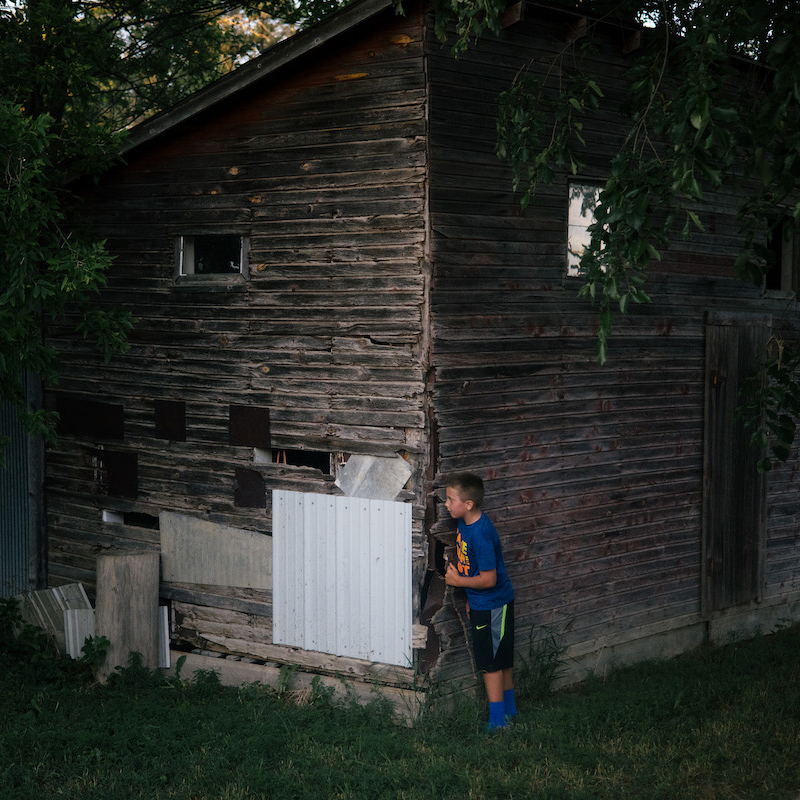 Monowi’s rarefied status as a one-person town has brought Mrs. Eiler some fame. Arby’s featured her in a commercial in 2018, and she has had visitors from all 50 states and more than 60 countries.

Strangers, assuming that an older woman living on her own must be lonely, have asked Mrs. Eiler to be their pen pal. She has declined those offers, owing to the fact that she already has plenty of friends.

“They don’t see the camaraderie of when the group comes around the table and has their coffee in the morning or their beer at 5 o’clock,” Rene Lassise, Mrs. Eiler’s daughter, said. “They don’t see that it’s real people, and it’s real connections to the people and the land and that place that keep her there.”

Mrs. Lassise lives in Tucson, Ariz., but returns to Monowi to help during busy times, like last June, when friends and family from across the country came to celebrate Mrs. Eiler’s half century at the tavern.

Knowing it could be one of the last chances to gather at the bar with Mrs. Eiler, the community pitched in to throw a big party. Some brought picnic tables from nearby towns. Others kept the beer cold. The Boyd and Knox County sheriff’s departments grilled burgers and served cake.

Four generations of Eilers and Piklapps mixed with visitors from near and far. Mrs. Eiler’s great-grandchildren played hide-and-seek among long-silent buildings. Her grandchildren staffed the bar, and her daughter ran the kitchen.

Mrs. Eiler perched at the locals’ table as visitors passed through to wish her well, often with a hug. She had known some of them their entire lives. Visitors gleefully shook her hand as though they were meeting a celebrity. A family drove five hours from Iowa to give her balloons celebrating her achievement.

“This is my home,” she said. “All my friends are around. Why would I want to leave?”

“I can’t imagine what it’d be like if Monowi wasn’t there.” 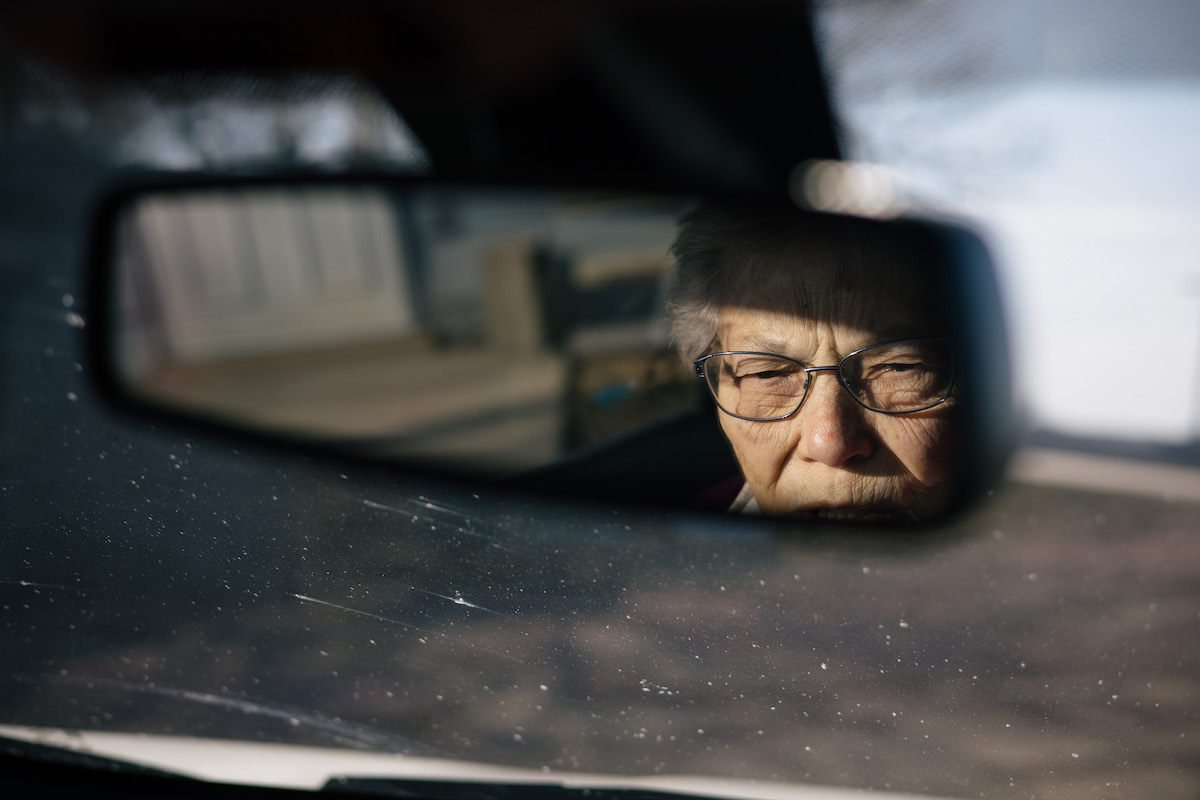 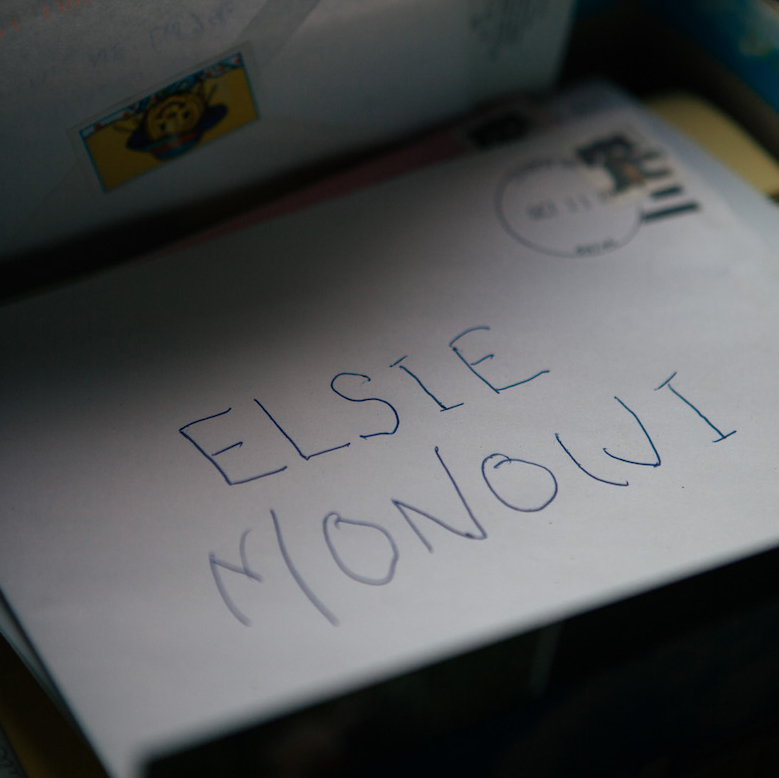 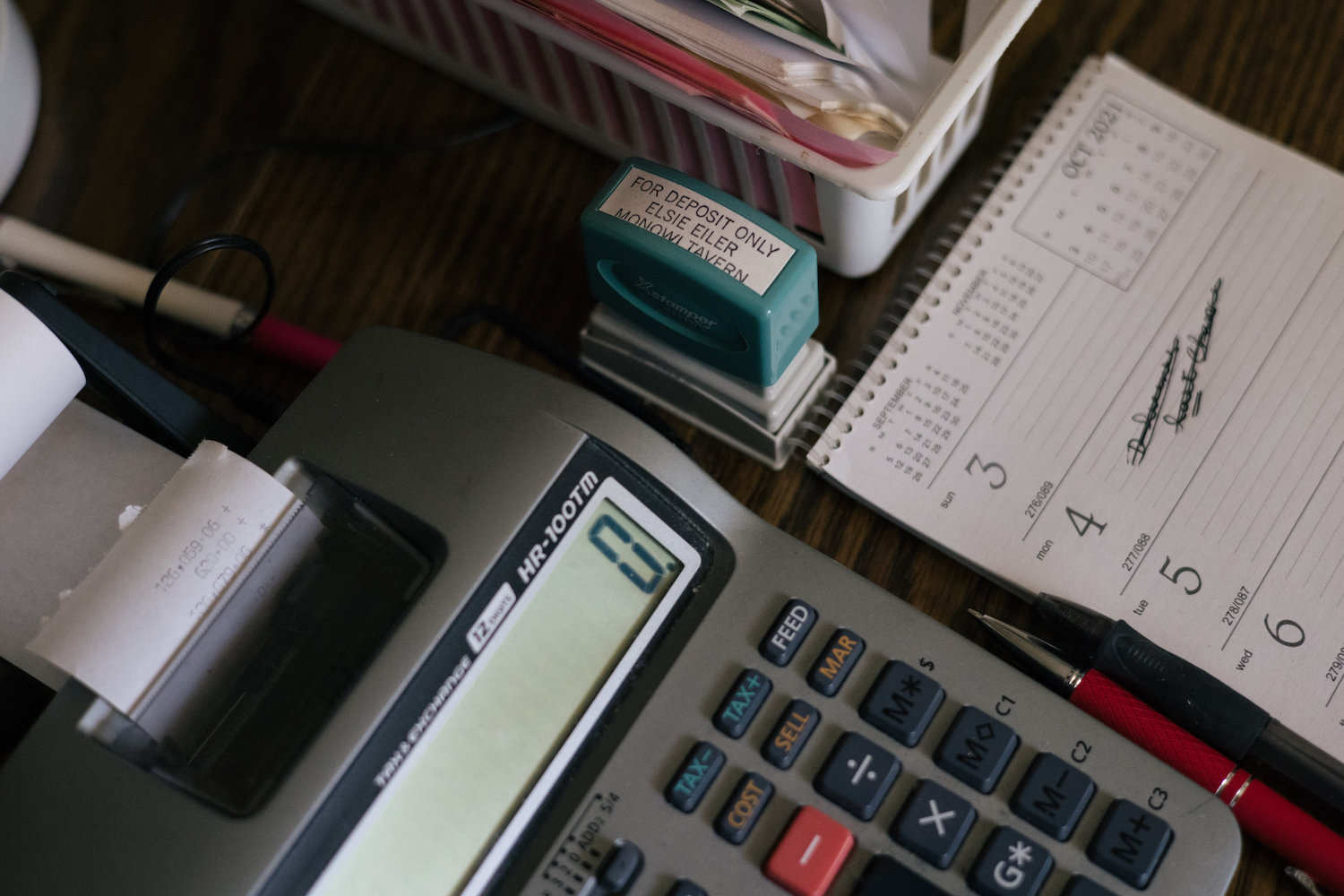 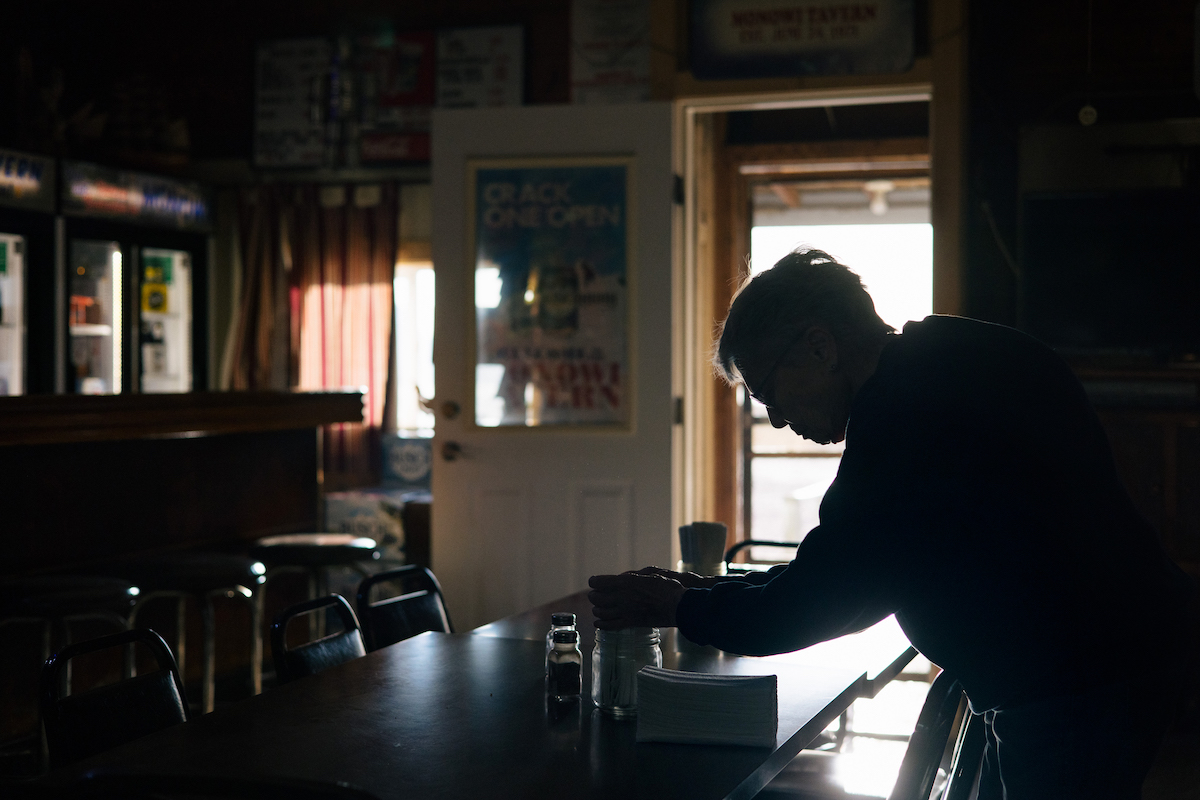 When a town dies, its history ends along with its future. Connections to the land disappear, and locals who moved away no longer have a hometown to return to.

“You’re not going to just show up at somebody’s place,” Mr. Nielsen, the rancher, said. “It’s going to be lost.”

When the bar is closed on Mondays, Mrs. Eiler’s regulars get a window into what life will be like once she is gone. They might drive seven miles west of Monowi to the town of Lynch, which has a bar and a bowling alley. But with the limited options, they might just stay home. Allen Holz, who is at the tavern almost every day, said his $2 Budweiser “just doesn’t taste the same” anywhere else.

Without a seat at Mrs. Eiler’s table, people like Mr. Holz and Mr. Nielsen are bracing for the loss of chance meetings with neighbors and the absence of personal contact with the world beyond their own.

Mrs. Eiler has had some recent health problems, which have given her regulars a new sense of urgency, compelling them to visit the bar frequently, sometimes twice in one day. On Tuesday mornings, vehicles are already idling in the parking lot by the time Mrs. Eiler arrives to open.

She has owned the bar longer than many laws governing restaurants have existed. Changing ownership would require bringing several parts of the building to state restaurant code, which the business is currently exempt from doing.

The bar has an outhouse instead of than a bathroom with running water. There is no sprinkler system in the bar nor ventilation above the stove. The building, which was pieced together from others, has foundation problems.

Keeping the bar alive is possible — someone could build a new structure — but it would be expensive. Though some customers, including Rocky Wilson, who sometimes helps Mrs. Eiler with the lunch and dinner rush, have discussed saving the bar, no one has the money to do it.

“I can’t imagine what it’d be like if Monowi wasn’t there,” Mr. Wilson said.

Neither can Mrs. Eiler.

“If I let myself sit and think about it, I feel sad that the time is going to come that I can’t be in there,” she said.

Her daughter learned to ride a bike on the dirt road outside the front door. Her son installed the light switches she turns on and off every day.

“I don’t know what the future holds for here, but I’d like to see it keep going,” Mrs. Eiler said. “Otherwise, it’s just going to be another bunch of shambled buildings on the side of the road.”

Alyssa Schukar is a photographer and writer based in Washington. She grew up in Lincoln, Neb., about 200 miles from Monowi.