Protesters across California took to the streets last night in defiance of Gov. Gavin Newsom’s latest nighttime curfew orders that went into effect Saturday night to clamp down on resurging coronavirus cases.

In Huntington Beach, a crowd of about 400 – dubbing themselves “Curfew Breakers” – gathered in front of the city’s main pier to protest the curfew that took effect at 10 p.m.

By about midnight, the crowd had largely fizzled out.

Further north in Fresno, dozens of people gathered at the River Park Shopping Center to protest Newsom’s orders. A protester told ABC 30 that the curfew will only hurt small businesses.

“I just think it’s ridiculous – they’re going about this all the wrong way,” a woman said.

Meanwhile, officials in Los Angeles County – the state’s largest with about 10 million people – announced Sunday that all dining at restaurants, bars, wineries, and bars will be halted starting Wednesday.

A protest was held outside Los Angeles Mayor Eric Garcetti’s official residence on Friday in a demonstration bill as “Curfew Protest Block Party: No More Lockdown.”

The restrictions will last for three weeks. During that time these establishments can only offer take-out, drive thru, and delivery services. Wineries and breweries will be allowed to continue their retail operations, while adhering to current protocols. 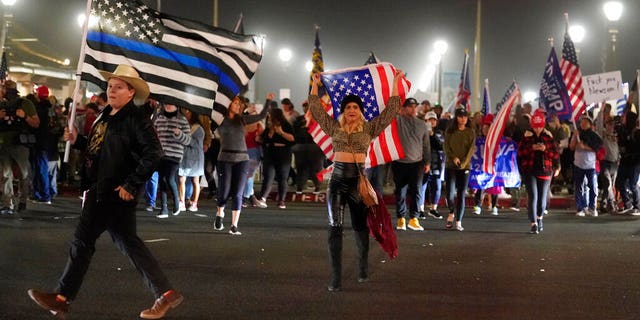 Demonstrators march across Pacific Coast Highway Saturday, Nov. 21, 2020 during a protest against a stay-at-home order amid the COVID-19 pandemic in Huntington Beach, Calif.  (AP)

County officials say they are on the verge of announcing even more stringent measures, including a possible lockdown if cases climb further.

The Golden State’s newest restrictions require people to stay home from 10 p.m. to 5 a.m. unless they are responding to an emergency, shopping for groceries, picking up takeout or walking their dogs. The monthlong curfew could be extended if rapidly worsening trends don’t improve.

The curfew applies to 41 of the state’s 58 counties that are in the “purple” tier, the most restrictive of four state tiers allowing various stages of economic reopening. Those counties encompass 94% of the nearly 40 million people living in the most populous U.S. state.

California as a whole has seen more than 1 million infections, with a record of almost 15,500 new cases reported Friday.