This hotel will wait on you, hand and foot – with a book, at least.

The Ben West Palm, an Autograph Collection Hotel in West Palm Beach, Florida, started offering a complimentary "Book Butler" for all its guests earlier this month.

The hotel is partnering with local retailer The Palm Beach Book Store to curate a "rotating series of topical and timely books that you may enjoy during your stay," according to the hotel’s announcement on social media.

Guests can check the list of books and if they find one they’re interested in, they can dial "0" from their hotel room phone to connect with the Book Butler, according to an announcement provided to Fox News by The Ben West Palm.

The Book Butler will then hand-deliver a new, complimentary copy of that book, as well as a custom-designed tasseled bookmark, the announcement said.

The program also has a food component called Book Bites. Guests will be able to order specially paired small plates to go along with their chosen book.

Guests will be allowed to keep their book after they check out of the hotel. If they choose to leave the book behind, it will be donated to the West Palm Beach Library Foundation, according to the announcement.

"Guests are excitedly stopping the Book Butler in his tracks to ask him questions about the program," Neto said in a statement provided to Fox News. "It’s not every day you see a hotel staff member walking around with a stack of books on a silver tray and in formal uniform. Guests love the creativity behind the program and have been ordering a copy to their rooms throughout the day." 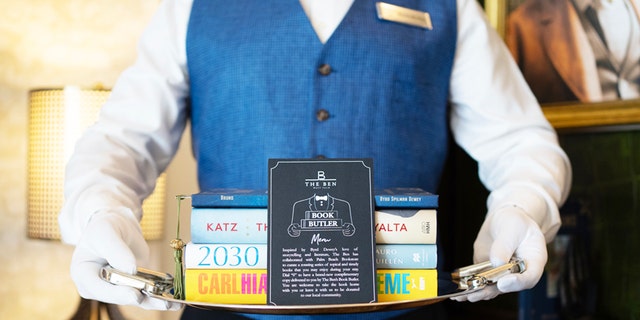 The Ben West Palm's Book Butler will hand deliver a complimentary book to guests as part of its new program, in partnership with The Palm Beach Book Store. (Jente Gees)

According to the announcement, The Ben and The Palm Beach Book Store plan to expand the partnership to include readings and talks with featured authors at the hotel.

Alhough The Ben only opened about a year ago, "the late 19th century origins of the property have always been grounded in literature and storytelling," the announcement said.

"Byrd Spilman Dewey, a bestselling author and celebrated columnist, moved to South Florida in 1892 and lived in an estate originally named Ben Trovato, The Ben’s namesake and a term loosely derived from an Italian phrase meaning, ‘even if it isn’t true, it’s still a good story,’" the announcement added.