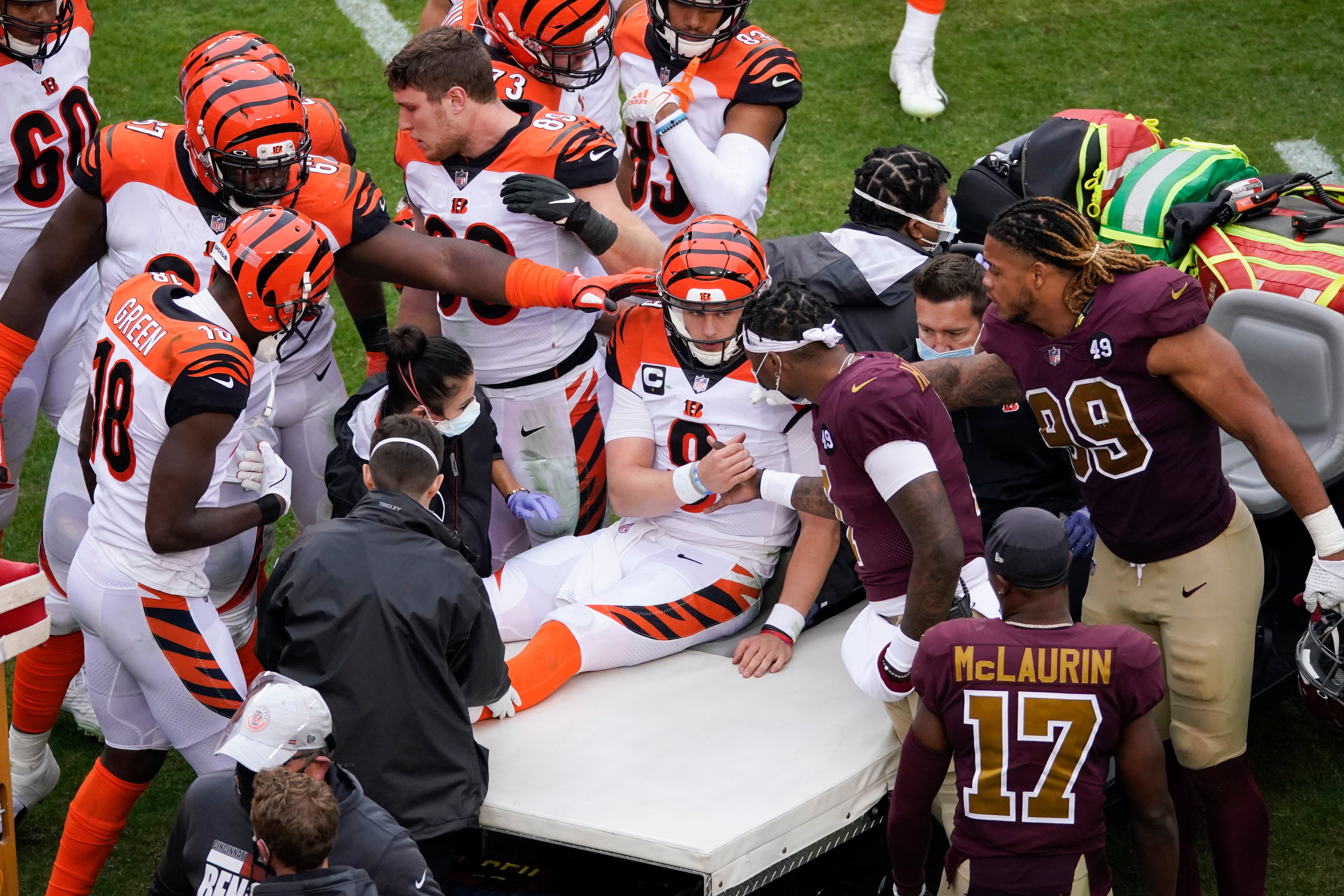 Chase Young told college teammate Joe Burrow he loved him and to get well after the top pick's scary knee injury Sunday.

Then, the No. 2 pick and Washington got going on defense, and the quarterback taken first overall 15 years ago led a comeback victory. After Burrow was carted off with a likely season-ending left knee injury, Young and 36-year-old Alex Smith helped Washington beat the Cincinnati Bengals 20-9 to stay in the thick of the NFC East race.

“We definitely took over after that,” said Young, selected one slot after Burrow in this year's draft. “Sacks started coming. Everything just started falling into place."

Burrow, Cincinnati's franchise quarterback, was injured early in the third quarter when he was hit high and low by two Washington linemen after throwing a pass. His left leg bent awkwardly, and he couldn't put any weight on it, ending his day at 22-of-34 passing for 203 yards and a touchdown.

“That’s an injury right there to a team leader that can take the wind out of your sails," Bengals coach Zac Taylor said. “It’s not fun. He was making improvements every week, and we were getting the offense headed in a direction that we thought was exciting.”

While Taylor wouldn't acknowledge it, Burrow's season appears over, too. He tweeted: "Thanks for all the love. Can’t get rid of me that easy. See ya next year.”

Burrow's departure allowed Smith and Washington (3-7) to seize momentum and move a half-game back of Philadelphia for first place in the NFL's weakest division. Just after Burrow left, Smith — who broke his right tibia and fibula on the same field just over two years ago — led a go-ahead, 55-yard scoring drive that ended with a 3-yard TD pass to Steven Sims.

In his second start since that gruesome injury Nov. 18, 2018, Smith was 17 of 25 for 166 yards and had a pass intercepted after it was tipped late in the first half. This was his first win since that day, wearing the same vintage uniform that doesn't carry any happy memories.

“The last time I wore them, I got them cut off me in an ambulance, so fun to be where I’m at now,” Smith said. “Another step, another thing I never thought I’d be doing again. Amazing to get a win.”

Washington rookie running back Antonio Gibson ran for 94 yards and a TD.

Burrow's replacement, Ryan Finley, couldn't do much for Cincinnati (2-7-1), which didn't punt once in the first half with the reigning Heisman Trophy winner at the helm. Finley was 3 of 10 for 30 yards and an interception in the final minutes.

“To lose your quarterback is tough, but that’s the way it goes," Taylor said. "Next man up and Finley came up, and we’ve got to help him and I’ve got to put him in some better situations there to give some confidence early, and we just didn’t get it done all the way around.”

Long before Burrow was injured, Young made the most of the first pro matchup against his old Ohio State teammate picked immediately before him in the draft. Young forced Burrow to fumble on the run during a fourth-and-goal play early in the second quarter, a sequence that ended with a touchback for Washington.

“I just ran to the ball like you’re supposed to,” Young said. “I knew when he cut the ball up, I could deliver a blow.”

Washington had its first coronavirus positive this week and put defensive lineman Matt Ioannidis on the COVID-19/reserve list but wasn't missing anyone for the game. Ioannidis has been on injured reserve since Sept. 29 and didn't travel for the game last weekend at Detroit.

Washington backup quarterback Dwayne Haskins raised his left fist in the air during the national anthem. Tight end Logan Thomas stayed in the bowels of the stadium for the song, emerging after it was over.

Bengals: Played a fourth consecutive game without running back Joe Mixon because of a foot injury. Mixon went on injured reserve Saturday, meaning he'll miss at least the next two.

Washington has a short turnaround before visiting Dallas on Thanksgiving, while Cincinnati hosts the New York Giants next Sunday.