President Trump late Tuesday night threatened to veto the must-pass bill to fund the military for the 2021 fiscal year if it includes an amendment introduced by Sen. Elizabeth Warren, D-Mass., aimed at renaming military assets named after Confederate leaders and generals.

Warren on Tuesday gave a floor speech on the matter, and the Senate Armed Services Committee earlier this month approved the measure's inclusion in the National Defense Authorization Act (NDAA). The Senate on Tuesday voted 89-4 on a motion to proceed on the bill, which takes it one step closer to passage — but it might be forced to remove Warren's amendment if Trump decides to hold fast to his veto threat.

"I will Veto the Defense Authorization Bill if the Elizabeth 'Pocahontas' Warren (of all people!) Amendment, which will lead to the renaming (plus other bad things!) of Fort Bragg, Fort Robert E. Lee, and many other Military Bases from which we won Two World Wars, is in the Bill!" Trump tweeted.

Trump earlier this month made clear he opposed renaming military bases and other assets that are named after those who fought with the Confederacy, and White House press secretary Kayleigh McEnany began a press briefing by reading a statement from the president on the topic.

"These Monumental and very Powerful Bases have become part of a Great American Heritage, and a history of Winning, Victory, and Freedom,” Trump also tweeted. “Therefore, my Administration will not even consider the renaming of these Magnificent and Fabled Military Installations. Our history as the Greatest Nation in the World will not be tampered with. Respect our Military!"

Previous efforts to rename at least 10 military installations, including Fort Hood in Texas, Fort Benning in Georgia and Fort Bragg in North Carolina, have stalled on the grounds that those names are part of tradition. But Warren in her speech Tuesday said the country could not continue to allow its military installations to honor "traitors" to the United States.

"The defense bill we are debating today takes an important step in this direction by addressing the honors that our nation continues to bestow on Confederate officers who took up arms against the United States in the defense of chattel slavery," she said. "This bill denies those honors to military leaders who killed U.S. soldiers in defense of the idea that black people are not people, but instead are property to be bought and sold."

Warren added: "Those who complain that removing the names of traitors from these bases ignores history ought to learn some history themselves. These bases were not named in the years following the Civil War. No. They were named decades and decades later, during the Jim Crow era, to strengthen a movement that tried to glorify the Confederacy and reinforce white supremacy."

The language of the bill would not just rename bases, but ensure that the Confederacy is not honored anywhere, in any form, by the U.S. military.

"Not later than three years after the date of the enactment of this Act, the Secretary of Defense shall implement the plan submitted by the commission ... and remove all names, symbols, displays, monuments, and paraphernalia that honor or commemorate the Confederate States of America... or any person who served voluntarily with the Confederate States of America from all assets of the Department of Defense," the bill reads.

Warren's amendment is more sweeping than one proposed by Sens. Tom Cotton, R-Ark., and Thom Tillis, R-N.C., which would commission a study on the issue before allowing Congress and the Defense Secretary to choose whether or not to rename specific assets. Cotton called Warren's amendment "too broad" and said the government should "carefully study each property" before allowing legislators to decide what happens on a case-by-case basis.

The Warren amendment and the Trump veto threat come at a time of heightened tension over race as protests against racial inequality and police brutality have swept the country, largely set off by the death of George Floyd in the custody of the Minneapolis Police Department. Floyd, a black man, died after an officer used his knee to pin Floyd to the ground by his neck for nearly nine minutes. That officer, Derek Chauvin, has been charged with second-degree murder and three others were charged with aiding and abetting. 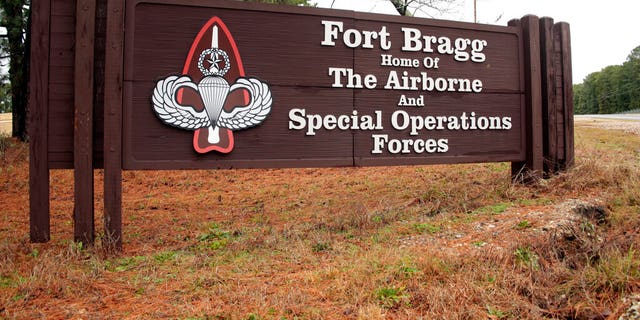 If Senate Republicans –­ at least some of whom backed the removal of the Confederate tributes in order to advance the package through the Armed Services Committee –­ refuse to back down on the provision, it could set up an intra-party game of chicken with military funding during an election year.

Congress has taken steps in recent weeks to remove its own tributes to those who served the Confederacy. House Speaker Nancy Pelosi, D-Calif., ordered the removal earlier this month of all the ex-House speakers who served the breakaway South, which was reunited with the rest of the United States after the Civil War.

"Tomorrow, Juneteenth, the clerk will oversee the removal of those Confederate speakers from the House," Pelosi announced at a press conference on June 18. "There's no room in the hallowed halls of this democracy, this temple of democracy, to memorialize people who embody violent bigotry and grotesque racism of the Confederacy."