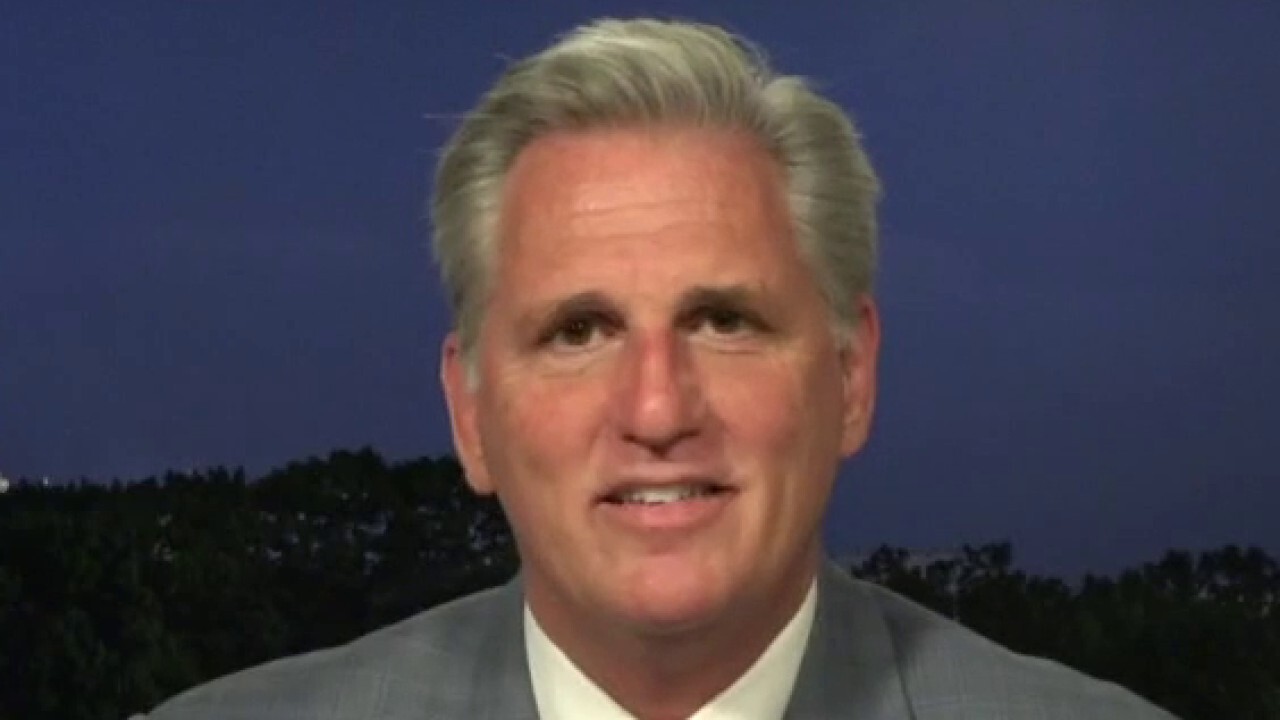 Members of the conservative House Freedom Caucus are trying to convince House Minority Leader Kevin McCarthy to back an effort to remove Nancy Pelosi as the speaker of the chamber, an unrealistic long-shot effort happening less than seven weeks before Election Day.

McCarthy, R-Calif., on "The Ingraham Angle" Wednesday night said he is not interested in pursuing the move against the speaker, essentially dashing any hope the Freedom Caucus members -- who occupy just about 40 of the 435 seats in the House of Representatives -- would have had of gaining traction in their effort.

"What I'm in favor of is defeating Nancy Pelosi and [Jerry] Nadler and all the others," McCarthy said as he made his pitch for Republicans deposing Pelosi, D-Calif., the old-fashioned way -- by winning elections on Nov. 3. "If we were able to remove Nancy Pelosi you'd have another Democrat. The real challenge would be we're ... four weeks away from [the] election, or 40-some days. These Democrats could actually vote against Nancy Pelosi, use it in their campaigns to say they're not with her, even though they vote with her 95% of the time."

But if the vote is forced it could put moderate Democrats in the uncomfortable spot of backing the controversial Pelosi on the record or publicly spurning their caucus' leader. The Freedom Caucus is known for its rabble-rousing antics in the House. Its members previously mounted an effort against former House Speaker John Boehner, R-Ohio, which was unsuccessful.

"I don't think it's the best move at this moment," McCarthy continued. "I think the best move is win 218 seats and that defeats Nancy Pelosi."

REP. ANDY BIGGS: NANCY PELOSI NEEDS TO BE REMOVED FROM HER POST AS SPEAKER OF THE HOUSE

"Isn’t it past time for Rep. Nancy Pelosi to leave her office as Speaker of the House?" he said. "I call upon our leaders in Congress to put forward the Motion to Vacate the Chair that has been prepared and merely needs to be brought to the floor."

Biggs linked to a Sept. 7 Fox News op-ed in which he made the case for removing Pelosi -- though the op-ed does not acknowledge the nearly nonexistent chance of success such a motion would have. Every Republican could vote for it, as well as double-digit Democrats in a campaign stunt that McCarthy says could help them in moderate districts, and Pelosi would still hold onto the speaker's gavel.

"Pelosi recently referred to members of Congress who support President Donald Trump as 'domestic criminals,'" Biggs wrote. "The left hates President Trump and the Americans who voted for him. In and of itself, it is a most despicable statement designed to divide the nation, but it shows a disregard for the institution itself."

He added: "Pelosi's recent escapade in a San Francisco hair salon conveys the air of elitism that has been the hallmark of her tenure as speaker ... Let’s admit it. Pelosi believed that she was above the law for which she so stridently advocates. She has issued many ridiculous mask edicts in the House of Representatives and used her Democratic Party majority to expand her power to control members."

All 198 Republicans and Rep. Justin Amash, L-Mich., would need to universally stand behind a motion to remove Pelosi and court 17 Democrats to join them. McCarthy says it will be easier to simply beat 17 Democrats at the ballot box.

"Do you know that there are fewer Democrats in the House since Nancy Pelosi held the gavel? At that moment we needed 19 seats to win the majority, today we only need 17," McCarthy said. "We won every special election we played in and that was in Democrat seats that Democrats won by 9 more than points and it happened to be in California."