After a testy exchange Tuesday with National Institute of Allergy and Infectious Diseases Director Dr. Anthony Fauci during a Senate hearing on the coronavirus, Sen. Rand Paul, R-Ky., said he believes the top infectious disease expert agreed with him that America's children need to return to school as soon as possible.

In an interview on "Your World with Neil Cavuto" later Tuesday afternoon, Paul pointed out that "[by] the end [Fauci seemed] to be agreeing" with his position. The hearing took place at the Senate's Health, Education, Labor and Pensions Committee.

FAUCI WARNS US COULD SEE 100,000 CORONAVIRUS CASES A DAY IF SURGE CONTINUES

In a recent interview with NPR, Johns Hopkins Dr. Joshua Sharfstein explained that “there is converging evidence that the COVID-19 virus doesn’t transmit among children like the flu, that it’s a lower risk.”

"I think it's a failure that we haven't prioritized opening schools," said Sharfstein.

Data from Johns Hopkins reports that there have been over 2.6 million confirmed cases and almost 128,000 deaths in the country to date.

However, despite a potential backslide amid reopening rollouts and a strong warning from Fauci, Paul told Cavuto he believes "we should be happy for children" and optimistic about the future.

"But, we need to send them to school. And, frankly, many of the schools in Europe are going back without masks, many of them are going out with modified...social distancing, and kids are not causing a spike," he argued, noting that he had presented charts of eight countries that exhibited "no spike" when they reopened their schools — including Austria, Belgium, Denmark, France, Germany, and the Netherlands. 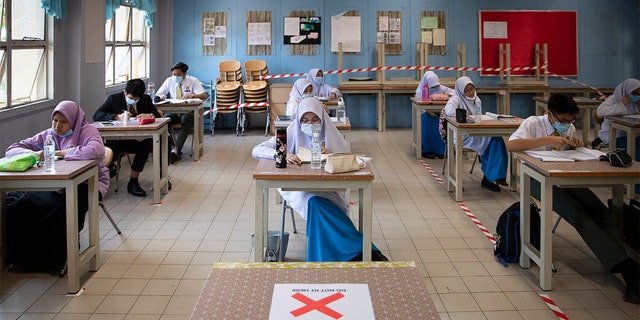 In an op-ed in The Hill published the same day, Paul also highlighted that contact tracing studies in China, Iceland, Britain and the Netherlands failed to find a single case of child-to-adult infection.

Next, he cited Brown University data on day cares that had remained open during the pandemic. Out of over 25,000 kids in their study, the Ivy League school found that 0.16 percent of children in these day cares had confirmed cases, and barely more than 1 percent of the staff — out of a group of more than 9,000.

In addition, the YMCA has also offered day-care service throughout the pandemic and found that, out of 40,000 children at 1,100 sites, there were no reports of coronavirus outbreaks or clusters.

While Paul recognized that there "definitely are increased cases" –­ including a notable uptick in the south and western U.S. –­ he pointed out that the effect of those spikes is yet to be revealed.

"If you just have cases and the average age is 37 and there's virtually no or no mortality, you could make the argument that we are increasing our herd immunity for the country," he told Cavuto. "And so, I guess I'm not as alarmed as some."

"I'm not saying it's nothing. I'm saying we don't yet know. They say that the death rate lags. That's true," Paul added.

But according to Paul, scaring American teachers and parents so much that they're going to refuse to go back to school contradicts the "scientific evidence" that "kids rarely transmit this to adults."