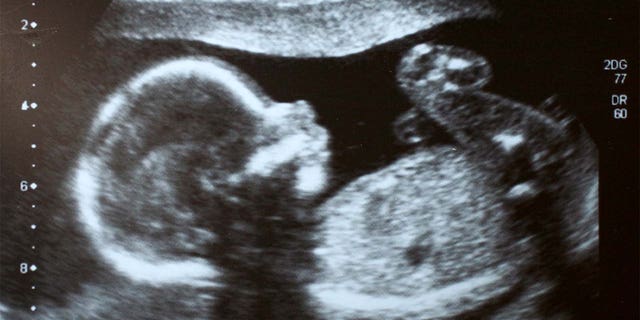 The Nation's Sophie Lewis argued that killing the baby in a pregnancy is morally permissible.  (iStock)

Ahead of the Supreme Court decision to overturn or uphold Roe v Wade, a think piece from outlet The Nation argued that mothers should embrace the fact that abortion is killing and not shy away from the fact that killing their "proto-person" is completely justifiable.

The piece, written by "feminist theorist" Sophie Lewis, stated, "Furthermore, if the labor of pregnancy is productive of life, then interrupting that labor is—logically speaking—productive of death. Rather than shy away from this, I believe we should embrace it as part of an effort to give gestating the respect it deserves."

To illustrate her point, Lewis presented an excerpt from author Maggie Nelson’s book The Argonauts, which read, "Feminists may never make a bumper sticker that says IT’S A CHOICE AND A CHILD, but of course that’s what it is, and we know it. We’re not idiots; we understand the stakes. Sometimes we choose death."

Lewis wholeheartedly embraced that notion in her write-up, remarking, "I agree with Nelson. There is something infantilizing about denying the fact that embryos die when we scrape them out of the bodies of which they are a part." 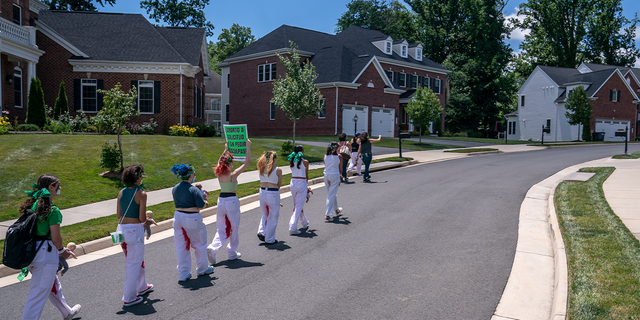 Pro-choice activists with Rise Up 4 Abortion Rights chant after marching to the home of Supreme Court Justice Amy Coney Barrett on June 18, 2022 in Falls Church, Virginia. According to the group, the dolls represent forced births. (Nathan Howard/Getty Images)

The author claimed that those who deny that abortion is killing a life are being too sensitive and trying to protect themselves from the truth. "It sentimentalizes pregnant or potentially pregnant humans as fundamentally nonviolent creatures to imply that we can’t handle the truth about what we are up to when we opt out."

"And it patronizes abortion-getters to insist that we are only making a health care choice, rather than (also) extinguishing a future child," Lewis added. The author admitted that if pregnancy begets a baby, then abortion terminates it and there’s no point in denying that.

"In my view, recognizing that gestating manufactures a proto-person requires acknowledging that abortion kills a proto-person," she stated, providing interesting stand-in terms for pregnancy and baby.

To justify her claim that killing the "proto-person" is fine, she compared it to other scenarios in which taking a life might be morally permissible. Lewis wrote, "We humans do kill, when necessary: Victims of assault sometimes kill in self-defense, targets of persecution sometimes kill for justice—or just to reduce the number of their persecutors—and the colonized sometimes kill for liberation."

Lewis added, "It is a mark of moral seriousness to acknowledge what it is that we’re doing when we butcher a cow, put a pet ‘to sleep’ or, for that matter, euthanize a human relative." 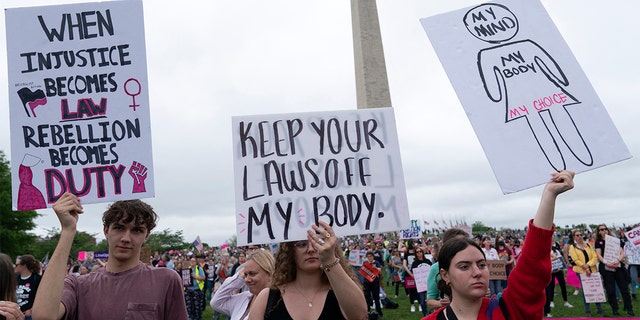 Pro-choice activists rally at the Washington Monument before a march to the Supreme Court in Washington, May 14, 2022. (Jose Luis Magana/AFP via Getty Images)

Later in her piece, Lewis clearly stated that pro-choice mothers can justify killing their unborn babies to avoid suffering a "forced life." "When we withdraw from gestating, we stop the life of the product of our gestational labor. And it’s a good thing we do, too, for otherwise the world would sag under the weight of forced life," she declared, adding, "A desire not to be pregnant is sufficient reason in and of itself to terminate a gestatee."

To embrace this killing would mean the pro-choice movement would be immune to pro-life agitators. "When ‘pro-life’ forces agitate against feticide on the basis that it is killing, pro-abortion feminists should be able to acknowledge, without shame, that yes, of course it is."

A pro-life demonstrator prays near the Supreme Court in Washington on June 8, 2022. (Eric Lee/Bloomberg via Getty Images)