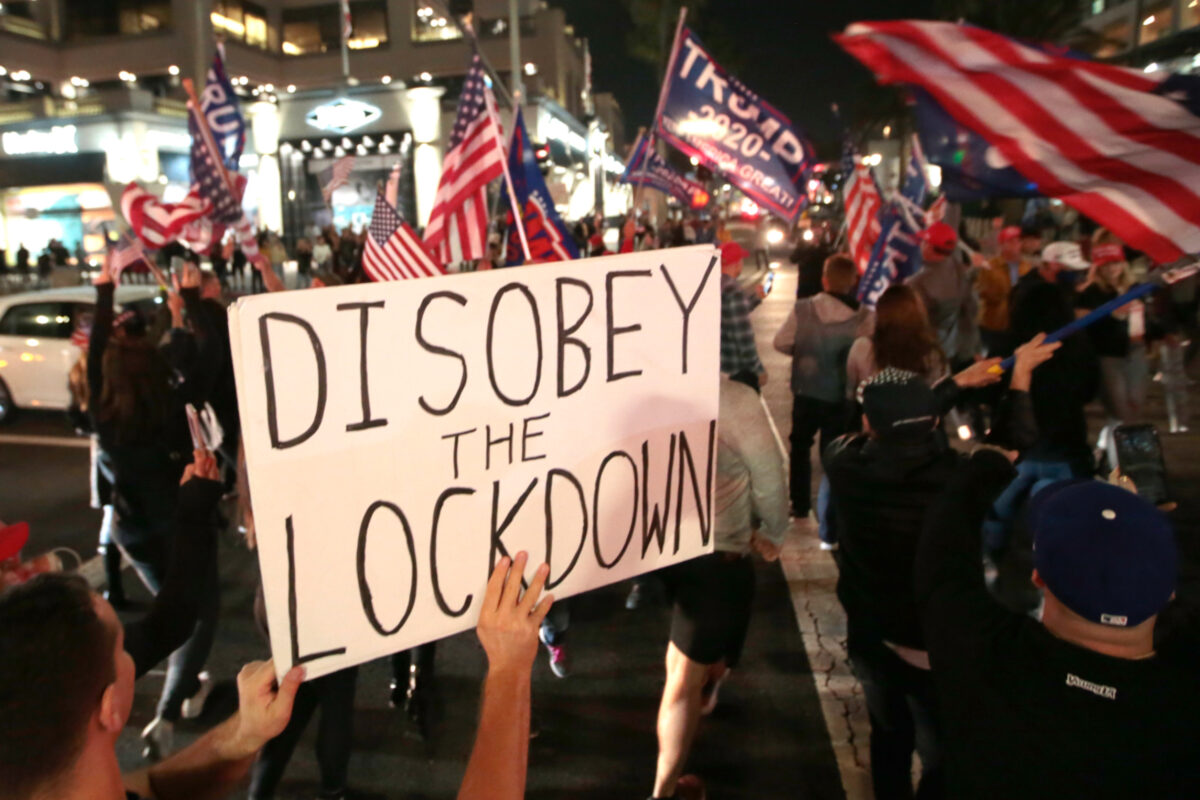 What local media described as a “massive crowd” of protesters assembled in Huntington Beach, California, on Saturday night to defy Democratic Governor Gavin Newsom’s month-long curfew order that took effect for most of the state at 10 pm.

The new mandate applies to counties in the state’s most restrictive “purple” tier of its reopening plan, in which about 94% of Californians reside. Officials said the objective is to discourage people from attending social gatherings and drinking alcohol, behaviors they claim contributed to the recent increase in COVID-19 infections throughout the state.

What curfew? Massive crowd in Huntington Beach, CA protesting the statewide covid curfew that went into effect less than an hour ago. Live report coming up at 11p on @CBSLA #Curfew #covid #COVID19 pic.twitter.com/daT7usD4fu

Video from the scene showed demonstrators lining the sidewalks around the Huntington Beach Pier at Pacific Coast Highway and Main Street. Many waved American flags as drivers honked their horns in support while driving through the area. Most attendees were there to condemn Gov. Newsom’s actions, saying the curfew infringes on civil liberties. Still, many were just as passionate about displaying their commitment to President Donald J. Trump.

This what we need more of!

“I [would] like to see curfews go away,” one unidentified man told the CBS News affiliate in Los Angeles, later adding: “I don’t agree with it. I think there’s too many restrictions as is. Obviously, a lot of people don’t agree with what our governor and our city officials are doing … but curfews is just a little too far.”

The “Huntington Beach Curfew Breakers” rally was publicized on social media by a popular television reporter, but it’s not clear who organized the demonstration.

“If you are a free American and are more than non-essential join us for a clear act of defiance against Newsoms [sic] 10PM stay at home order,” an online flyer said, instructing interested parties to meet at the pier at 10:01 pm.

A “curfew breakers” protest/rally is being planned for 10:01 pm tomorrow night at the Huntington Beach pier, one minute after the CA curfew is set to take effect. The OC Sheriff has already said he will not enforce the order, as have many Sheriffs across the state. @FOXLA pic.twitter.com/yRqqsBWgGF

Located about 37 miles southeast of L.A., Huntington Beach is the largest oceanside community in Orange County. The sheriff had previously said deputies would not enforce Newsom’s curfew directive.

A spokesperson for the Huntington Beach Police Department said protesters were mostly law-abiding, although one person was arrested for public intoxication. No unlawful assembly was declared, and law enforcement did not issue citations for individuals violating the curfew. The event ended after midnight, police said.

As The Daily Wire previously reported, Gov. Newsom on Thursday afternoon announced that a curfew was forthcoming. In a press release, his office described the new measure as “the same as the March Stay at Home Order, but applied only between 10 pm and 5 am and only in the purple tier counties that are seeing the highest rates of positive cases and hospitalizations.”

However, recent events have caused a growing number of Californians to question the moral authority of Gov. Newsom and other elected officials who have been accused of skirting the same guidelines they push onto their constituents.

Newsom faced harsh criticism after recent news reports revealed he had attended a birthday celebration at a ritzy restaurant earlier this month with about a dozen people. His presence at the dinner party violated guidelines set forth by the California Department of Public Health that prohibited social gatherings of more than three households. When Newsom apologized last week, he said the affair had taken place outdoors, but photographs later surfaced that called that claim into question.