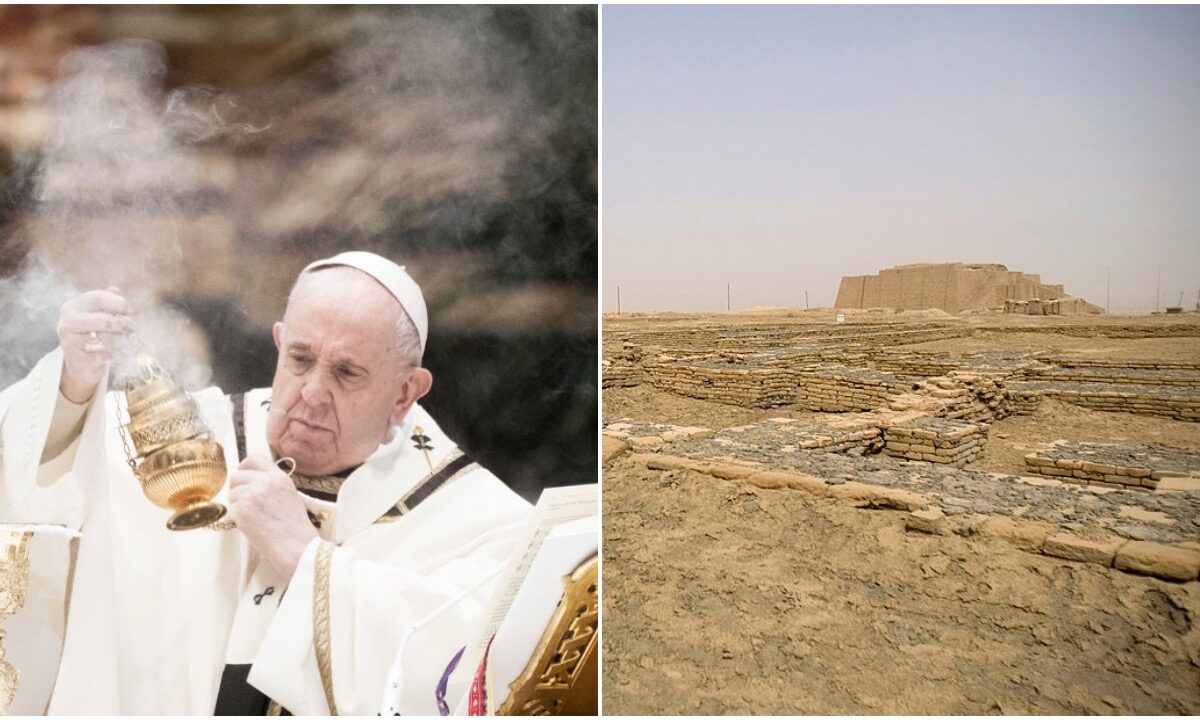 Pope Francis plans to hold an interfaith prayer ceremony next week amid the ruins of Ur, an ancient Mesopotamian city and the traditional birthplace of Abraham.

In a service the Vatican has dubbed “Prayer for the sons and daughters of Abraham,” the pope will conduct a service promoting harmony between different religions and will be attended by Christians, Muslims, Mandaean-Sabaeans, Yazidis, and other religious minorities in Iraq, according to Reuters.

Pope Francis is due to hold an inter-religious prayer service at the ancient Mesopotamian site of Ur when he visits Iraq next week, an event local archaeologists hope will draw renewed attention to the site https://t.co/brFjXFsucE pic.twitter.com/PSfBpazaSh

Ur, which lies approximately 200 miles south of Baghdad, features as the historical home of Abraham, where he lived until God called him out of it, according to Genesis. Judaism, Christianity, and Islam all claim Abraham as their father.

The Great Ziggurat of Ur, the site’s most prominent feature, was first constructed in the 21st century BC and was later rebuilt from the ruins of the original structure in the sixth century BC by a Neo-Babylonian king. Saddam Hussein was also adding reconstructions of his own to the facade.

Nearby the ziggurat is a complex of brick structures dated to circa 1900 BC, including one that is billed as the traditional house of Abraham.

Ali Kadhim Ghanim, the State Board for Antiquities and Heritage director for Ur, hopes Pope Francis’ visit to the region will bring international attention to the fragile site, which was once a bustling tourist attraction until wars and political upheaval devastated the country’s tourism industry. “Not only tourism, but we believe that there will be a Christian pilgrimage season,” Ghanim said.

Francis has held unprecedented interfaith ceremonies before. In March 2020, as the COVID-19 pandemic was beginning to spread rapidly, he drew criticism from ultra-conservative Catholic groups for holding an interfaith ceremony. One even accused him of associating with “infidels.” As Reuters reported, “Another influential traditionalist group, The Society of Saint Pius X, called the pope’s promotion of the prayer day the ‘poison fruit’ of the Catholic Church’s dialogue with Islam.”

“Maybe there will be someone who will say ‘This is religious relativism and it cannot be done,'” Francis said in the homily at the time. “But how can we not pray to the father of us all? Each one prays as they know how, as they are able to. We are not praying one against the other, one tradition against another … [but] as brothers,” he said.

When he visited Ground Zero in New York during his visit to the United States 2015, he participated in a ceremony that featured “meditations on peace” from Hindu, Sikh, Muslim, Christian, and Buddhist leaders as well as a traditional Jewish prayer for the dead. The service ended with the Young People’s Chorus of New York City singing “Let There Be Peace On Earth.”

In 2014, in a historical first, Francis permitted the recitation of non-Christian prayers on the grounds of the Vatican, including recitations from the Quran.