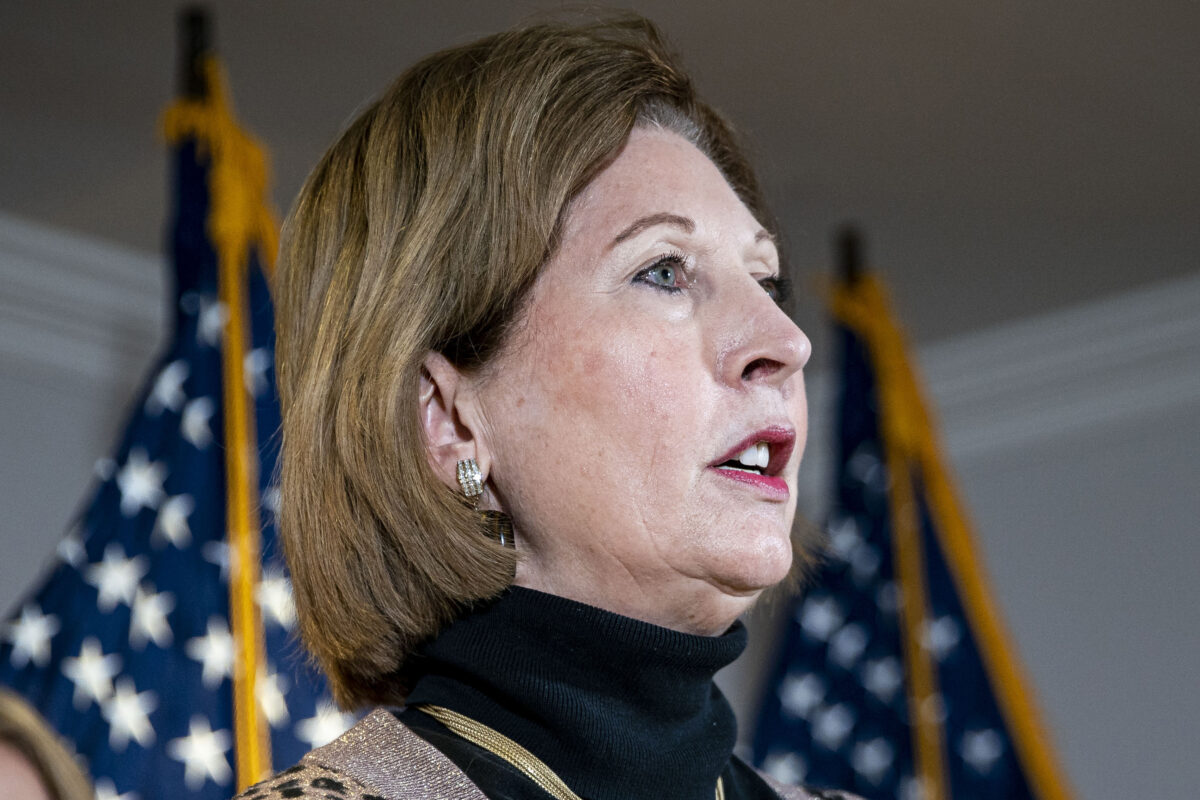 Attorney Sidney Powell released a statement late on Sunday after the Trump legal team announced that she was not part of their legal defense team.

“I understand today’s press release,” Powell wrote. “I will continue to represent #WeThePeople who had their votes for Trump and other Republicans stolen by massive fraud through Dominion and Smartmatic, and we will be filing suit soon.”

“The chips will fall where they may, and we will defend the foundations of this great Republic,” she continued. “#KrakenOnSteroids”

Sidney Powell released this statement to @CBSNews and @kristincbrown after the Trump campaign said she's not on the team:

Powell’s statement came shortly after the Trump legal team announced that she was not on the team.

“Sidney Powell is practicing law on her own,” Trump’s legal team said in a statement. “She is not a member of the Trump Legal Team. She is also not a lawyer for the President in his personal capacity.”

The move comes after Powell spoke at a press conference last week with Rudy Giuliani and Jenna Ellis.

At the press conference, she stood behind Giuliani as he said:

This is representative of our legal team. We’re representing President Trump and we’re representing the Trump campaign. When I finish, Sidney Powell and then Jenna Ellis will follow me. And we will present, in brief, the evidence that we’ve collected over the last, I guess it is two weeks. Also, Joseph diGenova, Victoria Toensing are here with me. There are a lot more lawyers working on this, but I guess we’re the senior lawyers — and Boris Epshteyn.

Trump tweeted over a week ago that Powell was part of his legal defense team, writing: “I look forward to Mayor Giuliani spearheading the legal effort to defend OUR RIGHT to FREE and FAIR ELECTIONS! Rudy Giuliani, Joseph diGenova, Victoria Toensing, Sidney Powell, and Jenna Ellis, a truly great team, added to our other wonderful lawyers and representatives!”

Fox New host Tucker Carlson called out Powell late last week over some of the claims that she made during the press conference this week, stating that she refused to appear on his show and allegedly became angry when repeatedly pressed for evidence.

During the segment, Carlson highlighted the following quote from Powell:

One of its most characteristic features is its ability to flip votes. It can set and run an algorithm that probably ran all over the country to take a certain percentage of votes from President Trump and flip them to President Biden, which we might never have uncovered had the votes for President Trump not been so overwhelming in so many of these states that it broke the algorithm that had been plugged into the system, and that’s what caused them to have to shut down in the states they shut down in.

“So we invited Sidney Powell on this show. We would’ve given her the whole hour; we would’ve given her the entire week actually and listened quietly the whole time at rapt attention — that’s a big story,” Carlson said. “But she never sent us any evidence despite a lot of requests, polite requests, not a page. When we kept pressing, she got angry and told us to stop contacting her. When we checked with others around the Trump campaign, people in positions of authority, they told us Powell has never given them any evidence either, nor did she provided any today at the press conference.”

Powell made additional claims on Saturday night during an interview on Newsmax TV that were widely criticized.

Washington Examiner columnist Byron York highlighted a portion of the comments that Powell made:

POWELL: Georgia’s probably gonna be the first state I’m gonna blow up. And Mr. Kemp and the secretary of state need to go with it because they’re in on the Dominion scam with their last-minute purchase, or award of a contract to Dominion of $100 million. The state bureau of investigation for Georgia ought to be looking into the financial benefits received by Mr. Kemp and the secretary of state’s family about that time …

NEWSMAX: Just to clarify, you’re saying that Governor Kemp, who’s been a longtime ally of the president, is directly involved because of financial benefit in a conspiracy to defeat the president in Georgia?

POWELL: We have certainly been told that there is evidence of that, and would warrant an investigation if anybody were actually going to do an honest investigation.

NEWSMAX: What more could you tell us about that alleged conspiracy — [as] the governor’s [involvement]?

POWELL: I can’t give you any more details than that now, but it would certainly warrant an investigation. If it had been reported to me as a law enforcement officer, I would be investigating it steadfastly.

Powell said Georgia GOP Gov. Brian Kemp is 'in on the Dominion scam.' Accused Kemp and GA Secretary of State of accepting financial benefits in conspiracy to defeat Trump. Evidence? 'I can't give you any more details.,' she said. From @newsmax 2/2 End. https://t.co/OAzEckDLzV pic.twitter.com/a3XWv4OJf5

This article has been expanded after publication to include additional information.