WASHINGTON - Several prominent Republicans said President Donald Trump's legal arguments had run their course, and called on him to allow the presidential transition process to begin.

Chris Christie, a Trump confidant who helped prepare the president for the debates, called the conduct of Trump's legal team a "national embarrassment." Sen. Pat Toomey, R-Pa., said Trump had "exhausted all plausible legal options," and urged him to concede. Sen. Kevin Cramer, R-N.D., said it's time to begin the transition.

The comments are the latest signs of dissent from within the president's party, with increasingly more Republicans urging Trump to accept the results of the election and move on.

And they come as President-elect Joe Biden moved forward with his selection of key members of his administration, with incoming chief of staff Ronald Klain saying Biden's first Cabinet picks will be revealed Tuesday.

Klain and other Biden transition team members declined to say which positions will be announced."If you want to know what Cabinet agencies they are and who's going to be in those Cabinet agencies, you'll have to wait for the president-elect to say that himself," he said Sunday morning.

In an interview on ABC News's "This Week," Christie said the president should give up his legal strategy. "Elections have consequences, and we cannot continue to act as if something happened here that didn't happen," he said. 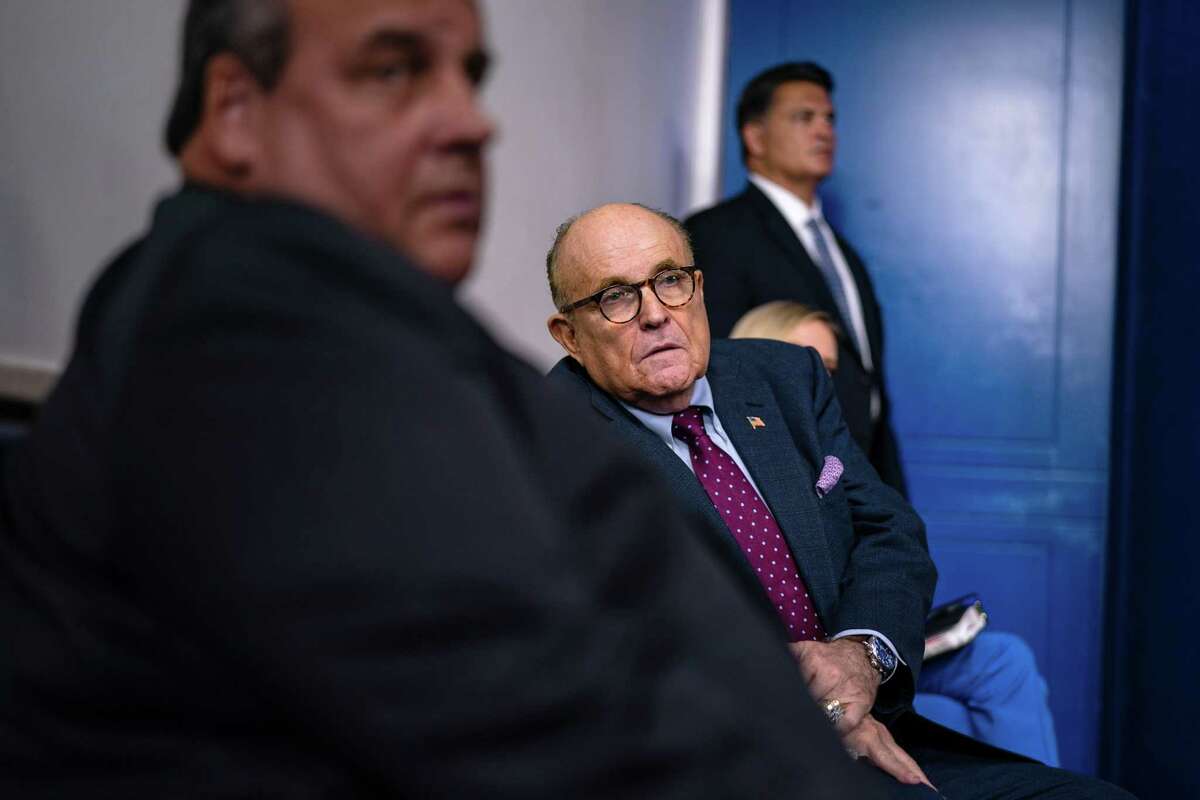 "The conduct of the president's legal team has been a national embarrassment," Christie added, noting that Trump's lawyers have made a flurry of fraud allegations but have offered no evidence to back them up in court.

"They don't do it in the courtroom," the 2016 Republican presidential candidate said, suggesting that attorneys are fearful of making baseless arguments under oath before federal judges.

"It must mean the evidence doesn't exist," Christie said.

Christie said the Republican Party should focus on trying to win Georgia's two runoff elections Jan. 5 to secure the Senate majority, rather than continuing with its unsuccessful legal challenges of the presidential election results.

"The rearview mirror should be ripped off," Christie said.

Giuliani, Ellis and Powell all appeared together at a news conference Thursday, when they made a range of baseless accusations about the integrity of the election. Powell in particular has been vocal in lobbing some of the most convoluted claims, alleging a conspiracy that involved "communist money," the late Venezuelan president Hugo Chávez and an algorithm favoring Democrats.

At the beginning of Thursday's news conference, Giuliani said he, Ellis, Powell and other attorneys present were "representing President Trump and we're representing the Trump campaign." Ellis introduced the group as "an elite strike force team that is working on behalf of the president and the campaign to make sure that our Constitution is protected."

But on Sunday, Guiliani and Ellis distanced themselves from Powell.

"Sidney Powell is practicing law on her own," Giuliani and Ellis said in their statement Sunday. "She is not a member of the Trump Legal Team. She is also not a lawyer for the President in his personal capacity."

Two advisers to Trump, who spoke on the condition of anonymity to discuss private conversations, said that the president disliked the coverage Powell was receiving from Tucker Carlson and others, and that several allies had reached out to say she had gone too far. The advisers also said she argued with Giuliani and others in recent days. The president believed she was causing more harm than help, an official said. "She was too crazy even for the president," a campaign official said.

Powell did not immediately respond to a request for comment.

Late Saturday night, after a federal judge threw out Trump's legal attempt to invalidate millions of votes, Toomey congratulated Biden and Vice President-elect Kamala Harris on their victory and encouraged the president to accept that result.

"President Trump has exhausted all plausible legal options to challenge the result of the presidential race in Pennsylvania," Toomey said in a statement, noting that the deciding judge, Matthew Brann, is a "longtime conservative Republican."

This result, Toomey noted, followed Georgia's certification Friday of Biden's victory there and Michigan's GOP legislative leaders rejecting efforts to block the certification of Biden's clear victory in that state.

"I congratulate President-elect Biden and Vice President-elect Kamala Harris on their victory. They are both dedicated public servants and I will be praying for them and for our country," Toomey said.

Sen. Lisa Murkowski, R-Alaska, who congratulated Biden in a statement after his Nov. 7 victory address, also urged Trump to "begin the full and formal transition process" and criticized the president's efforts to pressure state and local officials.

"President Trump has had the opportunity to litigate his claims, and the courts have thus far found them without merit," Murkowski said in a tweet Sunday night. "A pressure campaign on state legislators to influence the electoral outcome is not only unprecedented but inconsistent with our democratic process."

Senate Republicans have by and large avoided commenting on Trump's actions, with more than 40 not responding to requests for comment Thursday and Friday about the president's effort to have Michigan legislators reject the Biden victory there of more than 150,000 votes.

Republicans are aware that any perceived lack of loyalty to the president could prompt him to attack the defectors - just as Trump did Saturday night when he called Brann a "product of Senator Pat 'No Tarriffs' Toomey."

"No friend of mine," Trump tweeted.

Even some Trump backers who support pushing ahead with legal challenges said that Biden probably will take office and that the General Services Administration should allow the Democratic transition team access to the federal agencies and key briefings, as well as office space and millions of dollars in funding, so the administration can begin work Jan. 20.

"I just think that you have to begin that process, give the incoming administration all the time they need," Cramer said Sunday on NBC's "Meet the Press."

Cramer said that transition process should have begun at least a week ago. But he added that the transition could begin even as Trump's legal team continued to press its cases in the states.

This is, Cramer said, "just a simple legal process."

The president-elect, meanwhile, has gone ahead with assembling his administration.

Biden last week announced several senior White House staff appointments and told reporters that he has decided on his choice to lead the Treasury Department, though he did not reveal the person's name. Among the top candidates for the post is Federal Reserve Governor Lael Brainard, who served as a senior Treasury Department official in the Obama administration.

Klain also echoed Biden's recent comment that Trump's efforts to hinder the transition have put American lives at risk by making it harder for the Biden team to coordinate with the current administration on pandemic planning.

"The president-elect, the vice president-elect are not getting the kind of intelligence briefings they're entitled to," Klain said. "Our transition isn't getting access to agency officials to develop our plans, so there's a lot of focus on that vaccine rollout plan that's going to be critical in the early days of a Biden presidency. We have no access to that."

Trump, meanwhile, is refusing to concede the election and continues to make false accusations of widespread voter fraud.

The president and his campaign legal team have largely failed in their efforts to challenge the election in the courts. Trump weighed in on the Pennsylvania decision in a Sunday morning tweet shortly before he arrived at his golf club in Sterling, Va., for the second day in a row.

"Other than politics, how do you lose a case where large numbers of voters, far more than you need to flip Pennsylvania, are disenfranchised? Vote Observers thrown out of counting rooms," he tweeted, even though his campaign's attorneys have acknowledged that Republican observers were granted access to polling locations.

Trump and some of his defenders have argued that Democrats sought to delegitimize his 2016 election by investigating his business interests and his campaign's ties to Russia and voting to impeach him last year. Trump was later acquitted by the Senate.

Kate Bedingfield, Biden's deputy campaign manager, on Sunday pushed back against that comparison, calling it "absurd" and "an apples-and-oranges comparison at best."

"I don't think that when a president gets elected that he is no longer held accountable as he moves through his administration," Bedingfield said on "Fox News Sunday." "I think that's an incredibly different thing."

Trump's efforts to "overturn the will of the American people" will fail, she added, "because, again, Joe Biden overwhelmingly won this election - 306 electoral college votes."

The president also on Sunday lashed out at Maryland Gov. Larry Hogan, a Republican who said earlier in an appearance on CNN's "State of the Union" that he was "embarrassed that more people in the party aren't speaking up" against Trump.

"Well, I just don't think there are a lot of profiles in courage, frankly," Hogan said. "I mean, we all know how vindictive the president can be, how powerful his Twitter account is, and how he can really pressure Republicans and go after them. Very few of us are willing to stand up."

Soon after, Trump shared a link to a report on how Hogan spent $9.46 million on coronavirus tests from South Korea that turned out to be flawed. "This RINO will never make the grade," the president tweeted. "Hogan is just as bad as the flawed tests he paid big money for!"

"If you had done your job, America's governors wouldn't have been forced to fend for themselves to find tests in the middle of a pandemic, as we successfully did in Maryland," he tweeted at Trump. "Stop golfing and concede."

The Washington Post's Josh Dawsey contributed to this report.