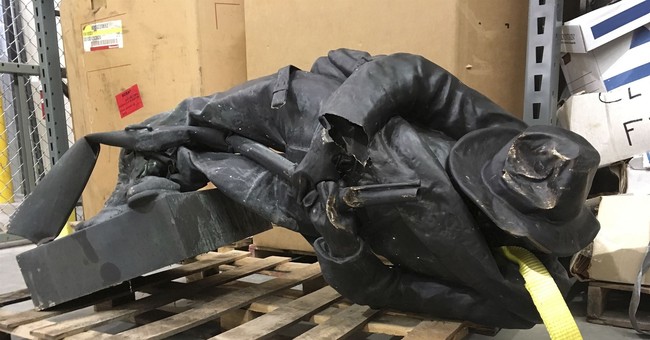 But I doubt it’ll feel it, since it doesn’t exist.

And progress won: It defeated a whole lot of statues — of people who’d been dead for over 100 years.

So it’s uncertain their side felt the loss; but hopefully, those who fought for victory experienced that virtue’s thrill.

Over the past several months, America was revolutionized.

Following the terrible death of George Floyd, the nation saw protests. Also on the docket: riots, looting, and burning.

It was an era of upheaval, and amid the displays of upset, there began a cleaning of the country’s house.

Part of the sweep: the toppling of old monuments.

And a whole lot of cement and other temporarily-malleable material hit the ground.

As reported by the Southern Poverty Law Center, 2020 saw 160 Confederate symbols taken down.

Of those, 94 were monuments — including a memorial to General Robert E. Lee which had stood at the U.S. Capitol for 111 years.

Per The Daily Caller, via the “Whose Heritage” database, the SPLC tracks roughly 2,100 public parks, statues, and buildings dedicated to the Confederacy.

“2020 was a transformative year for the Confederate symbols movement. Over the course of seven months, more symbols of hate were removed from public property than in the preceding four years combined.”

A General Lee statue in Virginia — which stood atop a time capsule which may or may not have contained a hair strand from the general’s horse — is particularly notable.

Despite having been graffiti’d with equality and anti-cop messages, it still stands.

The statue was the first Confederate monument erected in Richmond and one of the last left.

Gov. Ralph Northam already ordered it so, but such was prevented by lawsuits.

Ralph’s not the only one in government to side with a preemptive eviction.

As I covered last June, North Carolina did the same:

On Saturday, North Carolina Gov. Roy Cooper called for Confederate monuments to be removed from the State Capitol following two statues being pulled down by protestors Friday evening.

STATUES TOPPLED: After they were stopped by officers earlier this evening, demonstrators threw ropes around two statues on the Confederate monument outside the North Carolina Capitol and successfully pulled them to the ground. >>https://t.co/CSbIUxj1GZ pic.twitter.com/WisGCJTSAy

Via social media, Roy cited public safety as his reason for the additional takedowns:

“I have ordered the Confederate monuments on the Capitol grounds be moved to protect public safety. I am concerned about the dangerous efforts to pull down and carry off large, heavy statues and the strong potential for violent clashes at the site.”

I have ordered the Confederate monuments on the Capitol grounds be moved to protect public safety. I am concerned about the dangerous efforts to pull down and carry off large, heavy statues and the strong potential for violent clashes at the site. (1/3)

Among those whose countenances were conquered nationwide: Abraham Lincoln.

And Chief of Staff Lecia believes more should be removed:

“Despite this progress, communities informed the SPLC about more than 300 Confederate symbols located across the United States that remain,” Brooks said in a statement. “These dehumanizing symbols of pain and oppression continue to serve as backdrops to important government buildings, halls of justice, public parks, and U.S. military properties, including ten bases named after Confederate leaders across the South.”

Back to well-known Confederate(?) Abraham, he’s taken it on the chin not just in statue form, but even by sheer name:

“Lincoln’s Name Yanked From California School: He Didn’t Prove ‘Black Lives Ever Mattered’ to Him“

Surely more will be coming down, and not just symbols of the Civil War.

Putting aside the Confederacy, among the new generation — it seems — if you’re long-ago deceased…these days, it’s a tough crowd.

See more pieces from me:

Palette Cleanse: Jim Carrey Puts a Stop to the Political Paintings Following His ‘Quest to Rid’ America of a ‘Madman’

Find all my RedState work here.

Thank you for reading! Please sound off in the Comments section below.