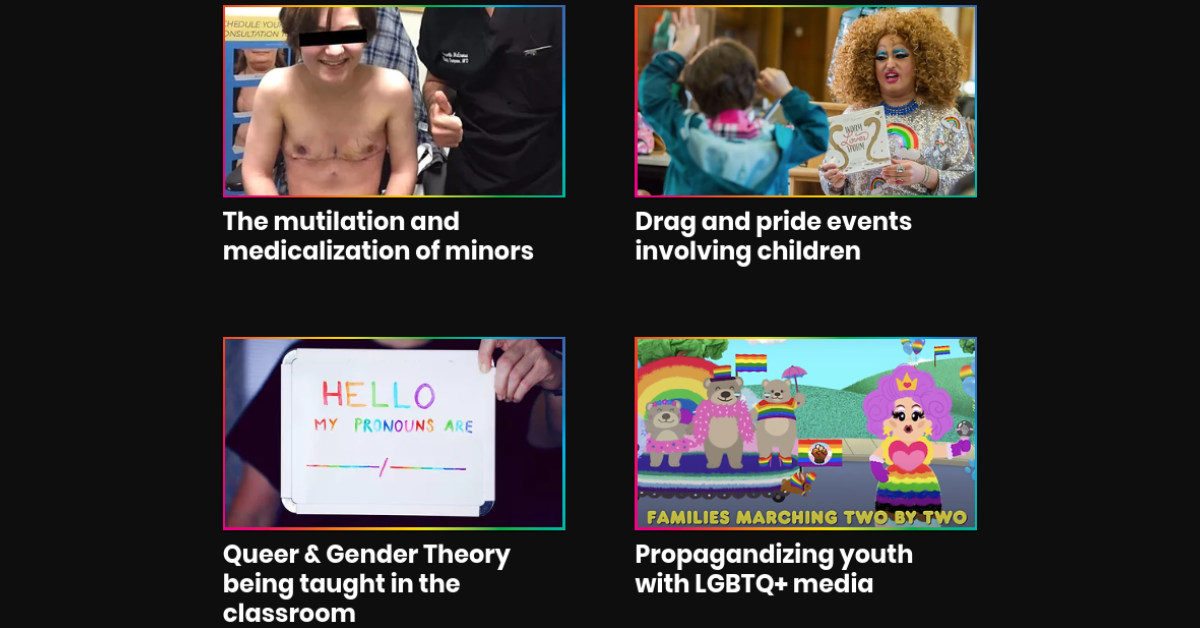 Homosexuals who oppose the sexualization of children are facing a new round of tech platform purges, one facilitated by a Harvard Law instructor who is also trying to shut down a conservative author.

The purges aren't confined to the U.S. or private contractual agreements. British organizations also lost their accounts, and one may lose its charitable legal status for promoting sex-based rights.

Gays Against Groomers lost its PayPal and Venmo accounts within minutes of each other Tuesday and its Gmail account the next day, according to emails and screenshots shared with the Daily Caller News Foundation. (PayPal owns Venmo.)

The group opposes "the recent trend of indoctrinating, sexualizing and medicalizing children under the guise of 'LGBTQIA+'" and sells merchandise with messages such as "no child is born in the wrong body" and "What's on your hard drive?"

Twitter banned the group, whose domain was registered in June, four times in its first three months, while the donation platform Donately banned it "very early on," Gays Against Groomer founder Jaimee Michell told Just the News. Instagram has "heavily shadowbanned" its account and removed features, but its Facebook and Twitter accounts remain unmolested "for now."

Gays Against Groomers received nonprofit status less than 24 hours before the PayPal and Venmo notifications, which alleged violation of their user agreements with no further explanation, the "based lesbian" said.

Google restored the Gmail account Wednesday afternoon, telling DCNF it was "temporarily suspended because of an automatic system that targets the bulk creation of accounts." Michell credits the reinstatement, which followed her appeal, to Google "seeing the pushback PayPal and Venmo received upon deplatforming us."

It's not an "anti-trans hate group" as slurred in the media, she said: "We are an organization that consists entirely of gay people as well as a few trans people too. We do not care what adults do, only that this agenda stopped being pushed on kids."

Gays Against Groomers called the financial deplatforming "woke homophobia" and said PayPal and Venmo "have made it abundantly clear that they support the sexualization and mutilation of children" by a subset of the gay community.

PayPal takes action against organizations that use its services "for activities that promote hate, violence, or discriminatory intolerance," a spokesperson told LGBTQ publication The Advocate.

Gays Against Groomers shares a nemesis with conservative author Matt Walsh, whose exposure of pediatric transgender procedures at a Nashville hospital has prompted calls for his prosecution.

Harvard Cyberlaw Clinic instructor Alejandra Caraballo, who blamed Walsh for a bomb threat against Boston Children's Hospital, called for the shutdown of the "astroterfing" Gays Against Groomers in June, incorporating a slur for gender-critical feminists, and identified Michell as the operator.

Gays Against Groomers offered the discount code "Alejandra" for its "What's on your hard drive?" merchandise in September, prompting Caraballo to accuse the group of harassment and libel and tag Twitter to suspend it again.

The group responded by noting Caraballo accused a mother of "actual child abuse" for removing her gender-confused daughter's social media access so she would detransition.

"We have had an ongoing Twitter war for a while," Michell told Just the News, blaming Caraballo for the group's previous Twitter suspensions.

Earlier this month, PayPal deplatformed the U.K.'s Daily Sceptic, Free Speech Union and the British journalist who founded both, Toby Young, with each notification citing unspecified violation of its "Acceptable Use Policy," Young said in a blog post Wednesday.

His personal-account appeal was rejected with no explanation, and his money remains frozen in that account, Young said. PayPal later pointed the Daily Sceptic account to its "hate, violence or racial intolerance" prohibition.

The company declined to tell The Telegraph why it shut down the account for UsForThem, a U.K. parent group that fought for school reopening during COVID-19 lockdowns, but pointed to policies that prohibit "spreading misinformation about the Covid vaccine" and "hate speech."

"PayPal has a long-standing and consistent Acceptable Use Policy," a spokesperson for the online payments platform told Just the News. "We take action when we deem that individuals or organizations have violated this policy." The spokesperson declined to specify how Young and Gays Against Groomers violated its policies.

The U.K. transgender charity Mermaids filed a legal challenge to the Charitable Commission's designation of charitable status for the LGB Alliance, which seeks to represent lesbian, gay and bisexual interests.

The alliance is not "exclusively charitable for the public benefit" but rather was formed as an anti-trans hate group, Mermaids testified, citing its "confrontational" social media and literature that has accused Mermaids of child abuse, The Guardian reports.

The parties spent five days in court this month arguing about the meaning of "lesbian." The judge called a short recess after LGB Alliance cofounder Kate Harris became distraught by cross-examination that asked why lesbians can't include "someone who is a woman as a result of gender reassignment."

Back on the stand, the lesbian Harris responded: "I'm going to speak for millions of lesbians around the world who are lesbians because we love other women ... We will not be erased and we will not have any man with a penis tell us he's a lesbian because he feels he is."